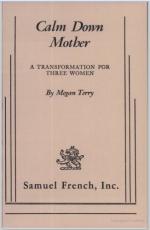 Introduction & Overview of Calm Down Mother

Megan Terry
This Study Guide consists of approximately 38 pages of chapter summaries, quotes, character analysis, themes, and more - everything you need to sharpen your knowledge of Calm Down Mother.

Megan Terry's Calm Down Mother (referred to as a transformation play) demonstrates various aspects of relationships between women, first espousing the most optimal situations that a woman can strive for and then showing how women, as well as their society, place restraints on their achievement of their most favorable growth. The work is considered one of Terry's most popular one-act plays and was first produced by Open Theatre on a double bill with Terry's play Keep Tightly Closed (a transformation play for men) on March 29, 1965, at the Sheridan Square Playhouse in New York City.

Terry uses only three women and minimum props for Calm Down Mother despite the fact that there are, in essence, multiple characters and blocs that make up this play. Over the course of the production, the three women take on different relationships to one another as they change from middle-aged shop owners to old women in a nursing home, to young prostitutes, sisters, friends, and mothers and daughters. In each section of the play, the characters explore what it means to be female, how society views them, and what tools they have to improve themselves.

Although the play was written and produced at the height of the feminist movement in the 1960s, it discusses topics that remain relevant to contemporary women as they pursue answers to their relationships with other women and society. Terry's play, popular in experimental theater in the middle of the century, continues to be staged in college and small theater productions across the United States today.

More summaries and resources for teaching or studying Calm Down Mother.

Calm Down Mother from Gale. ©2005-2006 Thomson Gale, a part of the Thomson Corporation. All rights reserved.