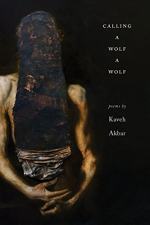 Kaveh Akbar
This Study Guide consists of approximately 66 pages of chapter summaries, quotes, character analysis, themes, and more - everything you need to sharpen your knowledge of Calling a Wolf a Wolf.

Calling a Wolf a Wolf Summary & Study Guide includes comprehensive information and analysis to help you understand the book. This study guide contains the following sections:

This detailed literature summary also contains Quotes and a Free Quiz on Calling a Wolf a Wolf by Kaveh Akbar.

The following version of this book was used to create this study guide: Akbar, Kaveh. Calling a Wolf a Wolf. Alice James Books, 2017.

Calling a Wolf a Wolf begins with the first section, “Terminal.” In this section the speaker of the collection is in the late stages of their struggles with addiction, particularly alcoholism. In “Wild Pear Tree,” the speaker finds themselves in a perceived endless winter of neglect, both regarding themselves and the world around them. Similarly, in the poem “Portrait of the Alcoholic with Home Invader and Housefly” the speaker in their drunken state nearly allows themselves to die after being attacked by a home invader. Eventually their self destructive behaviors become unignorable, however, and in the title poem “Calling a Wolf a Wolf (Inpatient)” we find the speaker checked into a hospital, marking the beginning of their long struggle to recovery.

While the speaker attempts to navigate the tenuous line between addiction and sobriety in poems such as “Portrait of the Alcoholic with Withdrawal” and “Portrait of the Alcoholic Three Weeks Sober,” several other poems in this first section give us a more in depth look regarding the speaker’s identity. In poems such as “Do You Speak Persian?” and “Heritage” we learn that the speaker was originally born in Iran, though having moved to America at a young age they feel themselves losing touch with their identity as an Iranian more and more every day, particularly through the loss of their first language, Farsi.

In the second section of the book, “Hunger,” we find the speaker continuing through the early stages of recovery. Doing so proves difficult for them, as they often find themselves at odds with an ingrained hunger and craving that they struggle to ignore. Poems such as “Thirstiness is Not Equal Division,” “Long Pig,” “Against Hell,” and “No Is a Complete Sentence” address this lingering hunger, condemning it, but also examining it as an inherited trait that must be acknowledged and dealt with. In other poems, such as “What Seems Like Joy” and “What Use Is Knowing Anything If No One Is Around” the speaker also begins to realize what exactly it means to be in a state of recovery, and how it is an ongoing process with no definitive end.

In the final section, “Irons,” the speaker is well into their recovery, and is beginning to adjust and deal with a return to a life of normalcy from which they were so far removed during their years struggling with addiction. In “My Kingdom for a Murmur of Fanfare” the speaker analyzes two different ways of reacting to the absurdity and unpredictability of life, while in “Tassiopeia,” a sort of ars poetica for Akbar, the speaker addresses the difficulty they have opening up and being honest with themselves and others. In poems such as “An Apology” and “God” we also see God and faith encroaching upon the speaker’s thoughts as they attempt to make sense of the process of pain and trauma they have experienced.

The final two poems of the collection, “I Won’t Lie This Plague of Gratitude” and “Portrait of the Alcoholic Stranded Alone on a Desert Island” portray the speaker at their most stable. In the former they celebrate their small daily victories, tasks as simple as making a cake. They also discuss how they have learned to love people a little bit at a time, and are now experiencing the rewards of such living. In the latter poem, the last piece in the book, the speaker describes themselves in a liminal state, but one they have grown accustomed to. While they have escaped the throes of their addictions, they recognize the fact that they will never be truly free from their urges, and that recovery is a process they must commit themselves to for the sake of the process itself.

More summaries and resources for teaching or studying Calling a Wolf a Wolf.

Calling a Wolf a Wolf from BookRags. (c)2022 BookRags, Inc. All rights reserved.