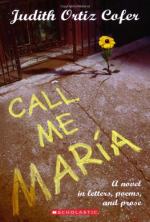 Plot Summary
+Chapters Summary and Analysis
Call Me Maria – Letter to Maria
More Than You Know Sabes? – An American Dream
The Power of the Papi-lindo – Love in America
Life Sciences: The Poem as Seen Under the Microscope – Translating Abuela: I Know Who I Am
Translating Abuela’s Journal: The Ice Age – Confessions of a Non-Native Speaker
Free Quiz
Characters
Symbols and Symbolism
Settings
Themes and Motifs
Styles
Quotes
Order our Call Me Maria Study Guide

Related Topics
Bad Influence
The Latin Deli: An Ars Poetica
The Line of the Sun

Judith Ortiz Cofer
This Study Guide consists of approximately 28 pages of chapter summaries, quotes, character analysis, themes, and more - everything you need to sharpen your knowledge of Call Me Maria.

Puerto Rico is a tropical territory island nation of the United States between the Atlantic Ocean and the Caribbean Sea. It is the homeland of Maria, Mami, and Abuela. It is the country from which Papi’s parents originate, and is the country to which Papi moves when his parents decide to return. It is where Papi meets, falls in love with, and marries Mami. It is where Maria is born and raised through the age of 14. While Maria loves Puerto Rico, her American-born father does not. He is not welcome or accepted because he was born in America. As a result, he suffers from depression and decides to move to New York. Maria accompanies him.

The Barrio is an area of the Bronx in New York where many different ethnicities of immigrants have come to settle in America. The Barrio is described as cold...

More summaries and resources for teaching or studying Call Me Maria.