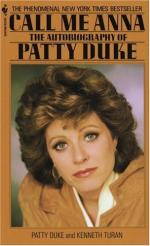 Patty Duke
This Study Guide consists of approximately 37 pages of chapter summaries, quotes, character analysis, themes, and more - everything you need to sharpen your knowledge of Call Me Anna.

In chapter twenty-nine, Patty and John take custody of John's three sons. However, having five children introduced a new chaos into Patty's life that she did not know how to deal with.

In chapter thirty, Patty tells how she hired two men who approached her on the street to be her managers. These men embezzled Patty's money, leading to a situation in which she and John were forced to take all five kids on the road to do plays in theaters all over the country.

In chapter thirty-one, Patty relates a story about a spiritual episode that took place in 1977. Patty was doing a film about psychic phenomena. The movie required long hours of work, leading Patty into a period of insomnia and an inability to eat. One night, on the way home, Patty began singing to songs on...

More summaries and resources for teaching or studying Call Me Anna: The Autobiography of Patty Duke.

Call Me Anna: The Autobiography of Patty Duke from BookRags. (c)2022 BookRags, Inc. All rights reserved.