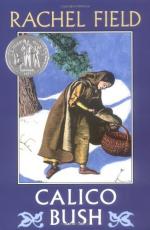 Rachel Field
This Study Guide consists of approximately 23 pages of chapter summaries, quotes, character analysis, themes, and more - everything you need to sharpen your knowledge of Calico Bush.

The novel is set in 1743, a time when this country was still new and there was still land waiting for the right family to settle it. The family in this novel settles a new farm along the sea coast of Massachusetts.

Marguerite Ledoux was to move to Quebec with her uncle and grandmother, where her uncle planned to teach people to dance, but illness stole her uncle's life while still aboard ship. The captain put Marguerite and her grandmother to shore in the American colonies where the grandmother quickly died as well. Now Marguerite is on another ship with a family to whom she has been bound-out to in exchange for room and board. The family is traveling from Marblehead to a new farm the father has bought on a piece of land in the coastal section of Massachusetts.

More summaries and resources for teaching or studying Calico Bush.