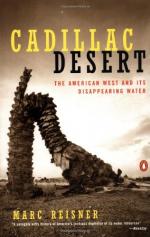 Discovering and Pioneering the American West

The book's opening chapters describe the discovery of the American West by the Europeans; the first Spanish explorers searching for El Dorado found the continent hostile and unusable. After the United States purchased the land, they sent in survey expeditions to research and evaluate it. The 1804 Lewis and Clark expedition resulted in an uneasy ambivalence toward the West: every "fertile prairie" stood in stark contrast to a "forbidding plain."

Nevertheless, the perception of the West as "the Great American Desert" drastically changed by the late nineteenth century. John Wesley Powell, after a scientific expedition down the Colorado River in 1869, put forth a program for settlement that imitated the pseudo-socialism of the successful Mormon irrigation systems in Utah. Powell's advice was ignored. By 1876, Powell could already see the results: "Speculation. Water monopoly. Land monopoly. Erosion. Corruption. Catastrophe."

The warnings of experienced Westerners were...