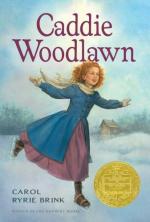 It is 1864, and the settlers near Dunnville, Wisconsin, on the Menomonie River, are nervous and isolated. Only two years earlier in Minnesota the Indians had killed a thousand settlers, and their own vulnerability makes the settlers in Wisconsin nervous. Caddie, her dog Nero, and her brothers Tom and Warren do not share that nervousness. Although they cannot swim, they cross the river — the other two clinging to Tom’s shoulders as he tiptoes along the riverbed. They watch the Indians working on a birchbark canoe, then head home, stopping to forage for hazelnuts.

The circuit rider, an itinerant preacher who also brings outside news to the frontier, pays a visit leaving a broken clock for Caddie’s father, John, to repair. John is the master mechanic of the mill at Eau Galle, a town a short distance from Dunnville. John has a large house and farm; he fixes all sorts of mechanical devices, including clocks.

Uncle Edmund, Caddie’s mother’s younger brother, visits as well. The children like his practical jokes, but Caddie is not too happy when one of the jokes results in her raft coming apart in the middle of the lake. Uncle Edmund rescues her and the raft, and gives Caddie a silver dollar for her trouble. When Edmund returns home, he takes Caddie’s dog, Nero, with him, to train as a bird dog.

Winter school term begins with a confrontation between Caddie and the biggest boy in school, Obediah Jones. It ends with the teacher reconfirming her authority over the classroom and Obediah. Before the term is well under way, Caddie slips through thin ice while skating. She ends up sick in bed, then confined to her house through Christmas. During her confinement she learns — first on her own, then with her father’s help — how to repair clocks.

Caddie returns to school in time for Valentine’s Day and learns her brother has a secret crush on the seamstress’s daughter, Katie. Caddie keeps her brother’s secret.

Then bad news comes: Nero has run away from Uncle Edmund. Caddie feels terrible about— and responsible for — Nero’s unhappiness in St. Louis, but more bad news is on the way.

There’s a rumor the local Indians are going to attack the settlers. Caddie knows they won’t, and her father believes the same, so he tries to calm the neighbors who gather at his farm for protection. But Caddie overhears some settlers planning on attacking the Indians, and goes to warn her Indian friends of the danger. She rides her horse across the frozen river, arrives at the Indian camp blue with cold, and warns them. She returns, accompanied by the Indians’ leader, John, who confirms to Mr. Woodlawn they have no intention of doing harm. The settlers are reassured, but still unsettled; Indian John decides to take his people away for a few months. On the way, he leaves his dog and his father’s scalp belt with Caddie for safekeeping until his return.

The Hankinsons — three children of a white settler and an Indian mother — get a visit in school from their mother. Mr. Hankinson is ashamed of his wife, so she is going away with her people. She leaves, with her three boys sniffling in the classroom. The next day Caddie takes the Hankinson boys to the Dunnville store after school and buys them candy and gifts, spending her silver dollar. For a moment, at least, their loneliness is eased.

Winter school term is over, leaving the children free to roam and play — and do chores. They get good news: the war is over! But soon after, their celebration is tempered by sadness: the President has been killed.

Soon it is time for the summer session of school. Indian John’s dog makes a habit of following Caddie to school and waiting outside the door, even though the other children and the teacher all think he’s ugly. One day, the dog raises a ruckus, but with good reason: there’s a fire! The children, led by Obediah Jones, fight the flames and save the school.

Caddie’s cousin Annabelle arrives to visit from Boston. Caddie’s mother loves hearing of Boston relatives, society, and “culture,” but Caddie, Tom, and Warren soon tire of hearing how wonderful Boston is compared to “quaint” Dunnville. Caddie and her brothers play a series of practical jokes on their refined cousin, for which Caddie’s mother punishes Caddie, because she is not acting like a lady, blaming her, and leaving her brothers unpunished. Caddie feels unfairly treated, and plans to run away from home, but her father talks with her about how hard it is to be a woman — not only having to do so much work, but also to teach gentleness, courtesy, love, and kindness. Caddie begins to see a woman’s work is far more than looking pretty in the kitchen, and realizes growing into a young woman might be something worth striving for.

Mr. Woodlawn receives a letter. He had long hidden from his family the fact that he had been born into a wealthy English family. Now, however, he has learned he can take his family to England and assume the title of “Lord Woodlawn,” along with the extensive properties inherited with the title. He puts the choice up to his family. Cousin Annabelle is certain they will all choose to be English Lords, but the family votes to stay.

Caddie has begun to learn some of the household arts — her brothers Tom and Warren following suit — and Annabelle returns to Boston.

Indian John returns, reclaiming his scalp belt and his dog. Soon after, Nero returns! He made his way through the wilderness back to Caddie. Caddie sees the circuit rider appear on a fall day and she thinks back to all the changes of the past year, how she is the same person, only different.