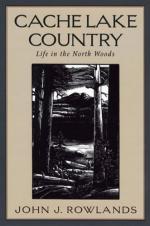 This detailed literature summary also contains Topics for Discussion and a Free Quiz on Cache Lake Country: Life in the North Woods by John J. Rowlands.

Cache Lake country is the story of Jim Rowlands's life living on Cache Lake in the 1940s. The book extends over a one year period, presumably in 1946. Cache Lake is a small body of water in Northern Maine, or the "North Country", as Rowlands calls it. Rowlands discovered Cache Lake on a trip for the timber company he worked for in order to survey land. After several days of survey, Rowlands came upon a lake that reminded him of his childhood. He decided at that moment he would live there, promising himself that he would return. In a week, Rowlands was camping at Cache Lake and when his company asked if he would work from a permanent camp on Cache lake, he immediately agreed.

Not long after he discovered Cache Lake, Rowlands met Chief Tibeash, a Cree Indian Rowlands's father knew and who he remembered from his childhood. The Chief teaches Rowlands much of what he needs to know to live in the wilderness. Rowlands eventually built a cabin in October with the help of his coworkers. Then Rowlands began many years of living on the lake and learning how to live in the North Country. After the first few years, a man named Hank, an artist who made his living drawing and taking pictures of wild animals, arrived. Both Rowlands (called "Jim" by his friends) and the Chief liked Hank immediately.

The first chapter of the book is an introduction, "Portage to Contentment", where Rowlands explains how he came to Cache Lake and his first impressions of the land. He introduces his two friends, Chief Tibeash and Hank and describes the scenery and animal life in the area. The next twelve chapters each cover a month, and together they describe an entire year on Cache Lake. Along the way, Jim explains how to live in the area, describing the use of timber, hunting, foraging, and fishing. He explains how to make a number of crafts and tools, including moccasins, canoes, stoves, outdoor bake ovens and a number of other things. Jim describes the animal life in great detail and puts a great deal of emphasis on the changes in the weather and seasons. Most importantly, Jim focuses on his friendship with Chief Tibeash and Hank and the way they supported one another at all times.

In January, Cache Lake country is characterized by "Long Nights and Deep Snows," and in February, with winter still going, Jim focuses on the stars and the silence of the terrain. March shows the first indications of spring and the awakening of animal life. April melts the ice and warms the temperature. In May, the green of the forest appears as does new animal life. June is Jim's favorite month, and is full of "soft twilights and fireflies." July is full of fishing, camping and summer activities and August brings the harvest and preparation for the long winter. In September, the birds fly away and the forest prepares to sleep. The frost comes in October and cold rain and gray skies follow in November. December is a thicket of blizzards and "wailing winds."