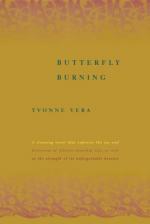 Yvonne Vera
This Study Guide consists of approximately 34 pages of chapter summaries, quotes, character analysis, themes, and more - everything you need to sharpen your knowledge of Butterfly Burning.

The following version of this book was used to create this guide: Vera, Yvonne. Butterfly Burning. Harare: Baobab Books, 1998.

Butterfly Burning, a novel told almost entirely in the third person, tells the story of Phephelaphi and Fumbatha, a couple living in post-World War II and pre-independence Rhodesia. The novel, which is broken into 21 chapters, describes their first meeting, the evolution of their relationship, and its tragic end.

In Chapter 4, Fumbatha meets Phephelaphi by the Umguza River. He is immediately drawn to her spirit and energy, and in Chapter Seven, the two of them move into a room together. The reader learns more about Phephelaphi, whose mother was a sex worker murdered by a jealous client, and more about Fumbatha, whose father was one of the 17 men hanged. In Chapter Nine, the reader is introduced to Deliwe, a woman who runs a brothel down the street. While Fumbatha is wary of Deliwe, Phephelaphi is drawn to her, and to the independence that Deliwe’s home offers her.

In Chapter 11, Phephelaphi begins to understand that Fumbatha may not be her only dream in life. She struggles to express her new ambitions to Fumbatha, who is less ambitious for his own life. In Chapter 13, the reader learns more about Zandile, a friend of Phephelaphi’s deceased mother, Getrude. Zandile took Phephelaphi into her home after Getrude’s death.

In Chapter 14, 1948 arrives and with it, a letter announcing that Phephelaphi has been selected to begin training as a nurse, an unprecedented achievement for a black African woman in colonial Rhodesia. Two weeks later, Phephelaphi learns that she is pregnant. Knowing that her pregnancy will cost her this new opportunity, Phephelaphi in Chapter 16 uses a needle to induce an abortion.

In Chapter 18, Phephelaphi and Fumbatha’s relationship grows strained. Without having been told, Fumbatha knows that Phephelaphi was pregnant and that she chose to terminate the pregnancy. He resents Phephelaphi and eventually sleeps with Deliwe. When Phephelaphi becomes pregnant again, just before she is about to enter the nurse training program, she is devastated. Forced into an impossible choice, Phephelaphi sets herself on fire just as Fumbatha is entering their home together. The novel ends with the suggestion that Phephelaphi has died just as easily and readily as her mother, Getrude, did.

More summaries and resources for teaching or studying Butterfly Burning.