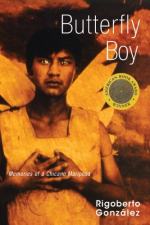 Rigoberto González
This Study Guide consists of approximately 49 pages of chapter summaries, quotes, character analysis, themes, and more - everything you need to sharpen your knowledge of Butterfly Boy.

"Butterfly Boy" is a coming-of-age memoir that, unlike most memoirs that tell their story in past tense, shifts between a present tense when the author is turning 20 years old and his memories of his childhood, which are told in past tense.

As the story begins, it is 1990 and Rigoberto Gonzalez is a 19-year-old college student in Riverside, California. Gonzalez is in an abusive relationship with an older man. As the story opens, he is leaving his lover's apartment after having broken up with him for the third time in their one-and-a-half year relationship. Gonzalez's destination is the bus station where he will take a bus to Indio, California, pick up his father at his paternal grandparents' house and then continue with him on a three-day bus ride to Gonzalez's maternal grandparents' home. There, Gonzalez will celebrate his 20th birthday. Part of the reason for going to Mexico with his father is to mend their relationship.

While they are on their way to Mexico, the narrative switches to Gonzalez's childhood, told in past tense. During this time, as his family were migrant farmworkers, he lived in several places, most often with an abusive grandfather and an extended family who only lived together for economic reasons. In spite of pooling their resources, they were still poor. In addition to the household situation, Gonzalez realized that he was gay, something that shamed his father, and he had to deal with weight issues. Things got worse for him when his mother died and his alcoholic father left both him and his brother with his abusive grandfather to marry another woman and start a new family. Gonzalez's grandfather made him work in the fields in the summer where he had sex with men who had wives and girlfriends. His first lover was a fellow student who asked Gonzalez to tutor him. They had sex, but the boy never claimed to be gay.

The only bright aspect in Gonzalez's childhood and were his studies. A teacher's aid gave him his first book, he lost his fear of English, and he became his school's Spelling Bee champion. Gonzalez decided that he wanted to go to college and be a teacher, and his determination got him there.

Back in the present tense, in 1990, Gonzalez and his father arrive at their destination, but do not reconcile. When Gonzalez returns to Riverside, he also returns to his lover and receives one last brutal beating. Afterwards, Gonzalez resolves to leave for good and take ownership of his life.

More summaries and resources for teaching or studying Butterfly Boy.