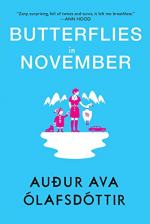 Auður Ava Ólafsdóttir
This Study Guide consists of approximately 31 pages of chapter summaries, quotes, character analysis, themes, and more - everything you need to sharpen your knowledge of Butterflies in November.

This detailed literature summary also contains Quotes and a Free Quiz on Butterflies in November by Auður Ava Ólafsdóttir.

The following version of this book was used to create this guide: Ólafsdóttir, Auður Ava. Butterflies in November. Translated by Brian Fitzgibbon. Pushkin Press, 2013.

The novel opens in the future, with the narrator and an unknown man looking at a photograph of a trip upon which the narrator went. The story then moves back to the present, where the unnamed narrator kills a goose with her car. She decides to cook the goose, but not before going to her lover’s house, where her lover breaks up with her. Afterward, when she arrives back home, her husband, Thorsteinn, tells her that he is leaving her and that he has impregnated one of his co-workers, Nina Lind. The two separate, and the narrator visits a fortune-teller, who tells her that she sees lottery winnings, dead animals, conceptions, and men in her future. Around this time, the Association for the Deaf calls the narrator and tells her that she has won a mobile bungalow. Not long after, her friend Audur falls while trying to walk to the narrator’s home and becomes hospitalized.

Audur asks the narrator to take care of her deaf four-year-old son, Tumi. She is initially resistant, as she has no interest in acting in a maternal role. One day, while in a store, the narrator decides to buy a lottery ticket, and she lets Tumi pick the numbers. Some nights later, she discovers that she has actually won the lottery. She places half the winnings in an account for Tumi and half in an account for her. The two set out on a journey to the village. The narrator tells the Association for the Deaf where to place the bungalow. On the way, she meets and becomes intimate with men, she hits a sheep with her car, and Tumi gains a feline companion. One of the individuals that the narrator meets on this journey is a veterinarian, who she meets once again at a hotel and later at the village where the bungalow is placed. Once they reach the village, the narrator lives with Tumi and they become close.

One night, the narrator takes Tumi to the fair. Thanks to encouragement from the vet, the narrator decides to bungee-jump from a crane attraction. During her jump, she injures herself when her hand hits a boat. When she awakens in the hospital, she decides that such reckless behavior is not a responsible thing to do when one is taking care of a child. Eventually, Thorsteinn decides to fly over and visit the narrator to ask her to take him back in the event that his relationship with Nina Lind does not work out. The narrator declines his offer causing him to ask Nina to marry him. Once Thorsteinn leaves, the narrator decides that she will not settle in the village. She tells the vet that she wants to travel abroad with Tumi, and the vet replies that he does not want to lose her. The narrator tells him that she has to be alone for a while. When Tumi and the narrator are about to leave, the narrator discovers that Tumi has lost his very first baby tooth.

More summaries and resources for teaching or studying Butterflies in November.