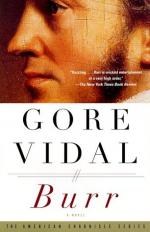 This detailed literature summary also contains Topics for Discussion and a Free Quiz on Burr by Gore Vidal.

Burr: A Novel by Gore Vidal is a piece of historical fiction that has much of its basis in fact and over ten years of research into the lives of those discussed in the book. The main character is a young law clerk named Charlie Schuyler. Charlie is also an aspiring writer and journalist and uses his position as Burr's law clerk to accumulate information about Burr's past life. When the novel opens, Burr is seventy-seven years old and has lived through the Revolutionary War, a vice presidency, a duel that killed his rival, Alexander Hamilton, and a trial for treason against the United States for conspiring to separate the western states from the union. Charlie's friend and mentor, William Leggett, is the editor of the Evening Post, a newspaper that covers all things political. Leggett wishes to control the 1836 election of the President and does not wish for Martin van Buren to win. With this end in mind, Leggett tells Charlie to get information from Aaron Burr that proves that he is van Buren's father. The more Charlie delves into Burr's life through the dictation of his memoirs, the more he realizes just how much he admires the man that most people seem to hate. Burr is delighted to have Charlie work on his biography and is actively involved in the project. Through Burr's memoirs the reader is taken on a journey through the past of the American Revolution, of Burr's rise in the political arena, of his vice presidential election that could have netted him the presidency, and his attempt to become King of Mexico or the President of the Western States.

The book is a complex story of the present mixed in with recollections of the past told through the voice of the main narrator, Charlie Schuyler, who at twenty-five is still very young and naive. Charlie uses both William Leggett and Aaron Burr as his mentors, and from these two very strong and passionate men, Charlie learns much of the world. He learns that Washington is not the strong and able military and presidential leader that history books would suggest. He learns that the election process is flawed and subject to falsification. An introduction to Constitutional law is accomplished with the story of Burr's trial for treason and all the methods that Thomas Jefferson used to convict Burr that directly defied the Constitution. The battle between the executive branch and judicial branch of government is exciting and surprising.

While the text appears to cover only the years between 1834 and 1840, the story really begins in 1775, when Burr joins the Continental Army and fights alongside the likes of Benedict Arnold, Jamie Wilkinson and General Lee. The story follows Burr through the days of the Revolution and the first two administrations under George Washington and then John Adams before Adams and Thomas Jefferson are inaugurated in 1800. Because of Burr's honesty and integrity, Jefferson becomes president rather than Aaron Burr. Had the election been swayed by even one vote, the very history of the American people could have been very, very different.

As Charlie learns more about Burr through his work on the man's biography, he grows and learns from one of the most intelligent men of that time. Despite Burr's bad reputation, Charlie finds that he really enjoys spending time with Colonel Burr and can hardly wait to hear the next installment of the memoirs that Burr dictates to Charlie.

Unknown to Burr, Charlie is working on an anonymous pamphlet that will discredit Martin van Buren and likely cause him to lose the presidential election. Despite Charlie's regard for Aaron Burr, he is still interested in making a living by writing, and he has been offered a great deal of money to produce just such a pamphlet. As time goes by, Charlie begins to have some doubts about what he is doing, but does not see a way out. Providence shines on Charlie very close to the deadline, and Charlie is able to sell his manuscript to a publisher, who plans to use its own well-known author as the supposed writer of the manuscript, so that no one will ever know Charlie is the one who did the research on the Burr book. Charlie is greatly relieved that he is able to rid himself of the burden without betraying his mentor.

At the end of Burr's life, he continues to groom Charlie for his life; even mentoring him before his presidential dinner with Andrew Jackson and Martin van Buren, the first time Charlie has ever been in the White House. Throughout the book the reader is aware of Burr's interest in young people and his desire to help them to become better than they are. Burr has influenced Charlie's life almost from the time he was born. In fact, the very end of the book gives the reader information about Charlie that shocks everyone.