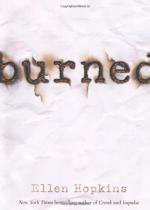 Ellen Hopkins
This Study Guide consists of approximately 20 pages of chapter summaries, quotes, character analysis, themes, and more - everything you need to sharpen your knowledge of Burned.

Burned is a young adult novel by Ellen Hopkins, which focuses around the torturous life of Mormon teenager Pattyn von Stratten.

Pattyn is one of several daughters born to Stephen and Janice Von Stratten. Stephen is an abusive drunkard, who regularly beats his wife and drinks heavily. Janice is a slovenly, distant, and cold mother, who doesn't care for her children, leaving the primary tasks of care-giving up to Patty. Patty does as she is told. When a cute boy named Derek becomes attracted to Patty, they must date in secret. Patty also begins drinking, but is found out by her father. Derek breaks up with Patty, gets back together with his ex-girlfriend Carmen, and spreads rumors that Patty is lousy at sex. This causes Patty to punch Carmen in the face, and throw her bookbag through the library window. Stephen is incensed, and sends his daughter off to live with his sister, Jeanette, for the summer.

At Aunt Jeanette's ranch, Patty discovers family and romantic love. Her Aunt Jeanette becomes a parent, guardian, and role-model, as well as someone in whom Patty can confide. Patty meets and befriends a college sophomore, named Ethan, and the two end up falling in love, and having sex. The summer ends, and Patty must return home for her final year of school. Her father turns his fists on Patty, who calls Ethan for help, and to let Ethan know that she has discovered she is pregnant. Carmen and others at school spread the word that Patty is pregnant. At Patty's insistence, Ethan arranges to come and get Patty, but they are followed by the police, and while driving through a snowy mountain pass, Ethan wrecks his car and is killed. Patty loses the baby, and is forced home once more. The novel ends with Patty plotting to exact revenge on all of those whom have wronged her.

More summaries and resources for teaching or studying Burned.