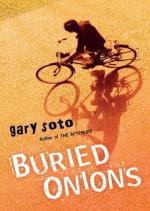 Eddie is the protagonist of Buried Onions, a coming of age story about a young man raised in the barrio culture of Fresno. He lives in a world of gangsters and punks, and he tries desperately to rise above his surroundings. Everywhere he goes there are people trying to prevent him from becoming anything better than the rest of them.

Eddie begins his story by describing the neighborhood where he lives in southeast Fresno. The neighborhood is run-down, and it's the kind of place where the "fences are sagging and the paint blistered on houses... Laundry wept from the lines, the faded flags of poor, ignorant, unemployable people... Some guys, all of them Mexican like [Eddie], worked on their cars" (2). Essentially, it is a poverty-stricken area, where most, if not all, of the residents are Mexican.

Eddie lists the many people in his...