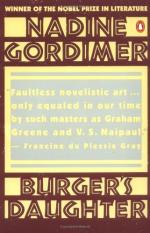 Nadine Gordimer
This Study Guide consists of approximately 49 pages of chapter summaries, quotes, character analysis, themes, and more - everything you need to sharpen your knowledge of Burger's Daughter.

This detailed literature summary also contains Topics for Discussion and a Free Quiz on Burger's Daughter by Nadine Gordimer.

At the beginning of the story, Rosa Burger is a 14-year-old school girl, whose mother has just been arrested. The story follows the next 15 years or so of Rosa's life. The story begins with her waiting in line to bring her mother some items outside a jail in Pretoria, South Africa. Suddenly, the story moves several years later. Rosa's mother dies and her father Lionel Burger is put on trial and sentenced to life in jail. Rosa visits him and encourages him, but after three years he dies in prison. As a young woman, Rosa attends the trial of her father. At this time she forms a relationship with a young man Conrad, who is not political. They both have other lovers but still live together in a neglected cottage and debate about what is the proper way of life. Conrad argues that Rosa has been brainwashed to care only about the revolution, not about her own life. Rosa is working in a hospital and on the outskirts of political involvement. She sees her parents' old friends the Terblanches, but refuses a request to help make copies of a political leaflet.

Rosa visits an old friend, black activist Marisa Kgosana, despite fear of being followed by the secret police, BOSS. There, Rosa hears debates on whether blacks can depend on radical whites, even those who give their lives to the cause like Lionel Burger. Rosa decides to get out of South Africa and enlists the help of politician Brandt Vermeulen, who has her request reviewed to be issued a passport. Rosa successfully flies to France. After a few days in Paris, she flies to Nice on the Mediterranean Coast to be with Katya, her father's first wife, who lives in a nearby village. There she lives a relaxed and pleasant lifestyle, and becomes involved in an affair with a Bernard Chabalier, a Paris professor who is writing a book. Rosa and Bernard love each other, but Rosa is clear that she is only the mistress and Bernard will not leave his wife and children. This seems to be acceptable to Rosa, since the people she meets in France are fairly liberal about their social arrangements. Rosa flies to London and agrees to meet her lover there, using a flat from family friend Flora. She meets students and activists and her long-lost adopted black brother Baasie at a political gathering. Baasie calls her on the phone in the middle of the night and says that he is sickened by Rosa's neglect of black martyrs like his father. He is tired of hearing about the great martyr Lionel Burger and makes Rosa very enraged. She vomits and later rethinks her commitments. Rosa decides to abandon her affair and return to South Africa.

In South Africa there is an increase in tension after the recent liberation of the Portuguese colonies. Rosa gets a job working in a hospital and sees more black children that are injured by police bullets than before. Her old black friend Fats meets her and complains that the black children have gone wild, but soon the parents of such children are also jailed by the government. In a wide-ranging crackdown, Rosa is jailed without charges, but it is believed she will be charged with anti-government actions along with her black friend Marisa Kgosana. An older Flora, as she did some 15 years earlier, is waiting at a women's prison to bring goods to Rosa and other women prisoners. So, Rosa completes her destiny of becoming a political prisoner.

More summaries and resources for teaching or studying Burger's Daughter.