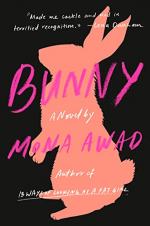 Mona Awad
This Study Guide consists of approximately 48 pages of chapter summaries, quotes, character analysis, themes, and more - everything you need to sharpen your knowledge of Bunny.

This detailed literature summary also contains Quotes and a Free Quiz on Bunny by Mona Awad.

The following version of this book was used to create this study guide: Awad, Mona. Bunny. New York: Viking, 2019.

The novel opens with narrator Samantha Heather Mackey attending a welcome back party at Warren University, where she is studying to get her MFA in fiction. Samantha is there with her only friend, Ava, a dropout from the nearby art school. She expresses her disdain for the four other women in her art class, whom she refers to as “the Bunnies” (3) because of their mutual nickname for each other. They are a tight-knit clique who shower one another with affection, and Samantha feels excluded by them. She has also given them individual nicknames, Cupcake (real name Caroline), Vignette (Victoria), the Duchess (Eleanor), and Creepy Doll (Kira). A poetry student named Jonah tries to talk to Samantha, but she brushes him off.

The next day, Samantha receives a note in her mailbox from the Bunnies inviting her to a literary party they call “Smut Salon” (9). Samantha is unsure if she should attend, and even feels like she might be betraying Ava by socializing with the Bunnies, because Ava hates them. She decides to go, and after reading some poetry, the Bunnies ask Samantha to tell them an erotic story. She talks about her high school crush, a boy named Rob Valencia. Samantha wakes up the next morning feeling strange, and recalls the end of the night, when the Bunnies asked her to go outside and catch a rabbit. In workshop class, the Bunnies are kind to Samantha and compliment her work.

Samantha contemplates her loneliness and isolation, and her writer's block. Her mother died when she was 13, and her father is on the run from creditors, so even during school breaks, she has nowhere to go. Furthermore, she is expected to turn in a thesis at the end of the year, and she has written nothing. She has not seen Ava since the night she went to the Bunnies' salon. Samantha attends a prom-themed party at Kira's house, and she is introduced to some strange young men who speak to her in stilted phrases. Then the Bunnies bring in Rob Valencia. Samantha is shocked, and the two begin dancing, but eventually Rob Valencia starts screaming, and then his head explodes.

The next morning, the Bunnies give Samantha drugs, ostensibly for her headache, and invite her to join their collective literary project, making “hybrids” (106). This turns out to be a bizarre ritual that involves turning rabbits into attractive and charming young men. However, when the men turn out defective in some way, Kira bludgeons them with an ax.

Samantha continues to be drugged by the Bunnies, and becomes a member of their group, until one day she is rescued by Ava, who reminds her of the life she lived before and the disdain she felt for these women. Samantha goes to Eleanor's house, planning to angrily confront her, but instead she is immediately sucked back into the group when they invite her to lead the ritual. Samantha attempts to conjure a man, but it seems like the ritual is a failure. However, when the women go outside, there is a man sitting at the bus stop. It is unclear if he is a real man or a Hybrid created by Samantha.

Samantha returns home, feeling bitter and lonely again. She cannot get in touch with Ava, and when she tries to find Ava's house, she cannot. One day she boards a bus and finds the man she saw outside of Eleanor's house there. When he exits the bus, she follows, and he leads her to Ava's house before seemingly disappearing. Samantha and Ava rekindle their friendship, and Samantha even begins to write again. However, their peace is interrupted when Ava tells Samantha she is dating a man named Max who lives upstairs. Max is the Hybrid Samantha created.

Max claims to be working on a performance piece at Warren, and it ultimately becomes clear that this piece involves the Bunnies. An embodiment of Samantha's deepest, darkest feelings and desires, Max is intent on punishing the Bunnies for how they have treated her. Samantha attends workshop and watches as the Bunnies arrive separately, disheveled and distraught, and read pieces about women falling in love with dangerous men. They insult each other’s work. Samantha goes to confront Max about his manipulation of the Bunnies, and finds him in Ava's house with a dead swan. The swan is from the pond on Warren's campus where she and Ava first met. Samantha realizes that Ava is not real, but an imaginary friend she created at her loneliest moment. She follows Max to Eleanor's house, and the Bunnies emerge, fighting with each other over the man they all love. Max gestures to the ax he had been holding, and Samantha hits him with it. Max then shapeshifts into the form of a stag, and kicks each of the Bunnies before wandering off into the woods.

Having finished her thesis, Samantha attends graduation. The Bunnies are wearing casts and neck braces. After receiving her diploma, Samantha visits the pond where she believed she met Ava. She is approached by Jonah, the poetry student, and invites him back to her house, presumably the beginning of an authentic friendship.

More summaries and resources for teaching or studying Bunny.