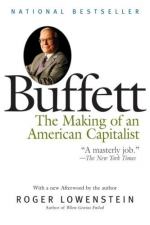 Buffett: The Making of an American Capitalist Summary & Study Guide

Roger Lowenstein
This Study Guide consists of approximately 46 pages of chapter summaries, quotes, character analysis, themes, and more - everything you need to sharpen your knowledge of Buffett.

Buffett: The Making of an American Capitalist Summary & Study Guide includes comprehensive information and analysis to help you understand the book. This study guide contains the following sections:

This detailed literature summary also contains Topics for Discussion and a Free Quiz on Buffett: The Making of an American Capitalist by Roger Lowenstein.

America is full of multi-millionaires and some billionaires. In every generation throughout history, in fact, there have been the super-rich in this country. Most of these individuals made their money through products and/or services which became valuable (e.g., automobiles, fast-food, computers). Unlike these individuals, Warren Buffett has made his money on the value of products and services offered by others, by investing in their companies. He did not do this alone but, rather, convinced other people to invest with him, first as partners, and then as shareholders in the now famous Berkshire-Hathaway Investment Corporation.

Obsessed with numbers and accumulating savings from childhood, Warren Buffett began investing at a young age. His investment strategies as an adult, however, were primarily based upon the philosophy of a university professor at Columbia Business School, Benjamin Graham. The key principle was to find companies whose stock was under-valued, purchase the stock, and hold the stock until its value was commensurate with the company's worth. Buffett added themes of his own, to include holding stocks for a lifetime and retaining management that was ethical, frugal, and effective. By 1995, Buffett was personally worth ten billion dollars, and any investor who began with him in 1956, putting in ten thousand dollars, was worth eighty million.

Buffett's personal life has been unlike that of any other billionaire. Still living in his hometown of Omaha, he resides in the modest home he and his wife first bought, drives his own car, and eats at his favorite local steak house. His extravagances include a personal jet and a vacation home in Laguna Beach, California, as well as a once-a-year extravaganza for his annual shareholders' meeting. His wife, Susie, lives in California, and his mistress, Astrid Menks shares his home. All three are close friends.

One of the greatest legacies Buffett has left for the lay person is the unraveling of the mystery of Wall Street, his common sense approach to investing, his opposition to the majority of fund managers and large traders who buy and sell stock daily, and his personal and professional values of commitment and loyalty. One cannot read this biography without developing a strong sense that this man, though eccentric and unusual, has the unique genius to "smell" a bargain, to attract the right people to manage companies in which he has huge interest, and to have the patience and integrity to ride through the rough investment times without panic. Indeed, anyone in the stock market or considering investing in the stock market would be wise to read Warren's Buffett's story, before jumping into funds whose managers take the traditional Wall Street approach.

More summaries and resources for teaching or studying Buffett: The Making of an American Capitalist.

Buffett: The Making of an American Capitalist from BookRags. (c)2022 BookRags, Inc. All rights reserved.