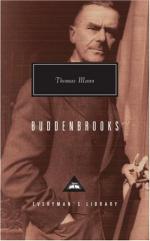 Thomas Mann
This Study Guide consists of approximately 37 pages of chapter summaries, quotes, character analysis, themes, and more - everything you need to sharpen your knowledge of Buddenbrooks.

This detailed literature summary also contains Topics for Discussion and a Free Quiz on Buddenbrooks by Thomas Mann.

Buddenbrooks is a novel about the decline of a family. The story chronicles four generations of a German merchant family and their decline over that period.

The novel begins in 135 with the entire family hosting other prominent townspeople for a housewarming dinner at their new home on Meng Strasse. The head of the family is Johann Buddenbrook, the son of the original founder of the firm. The family business is in grain and related enterprises and over the last several decades, the elder Johann has built the business up to be one of the best in town. His son the Consul Buddenbrook and his wife with their three children, Tony (Antonie), Thomas, and Christian are also present. After the dinner, The Consul discusses a letter that he has received from his half brother and the elder Johann's first son, Gotthold. Johann has cut Gotthold off from the family business because of his choice of wife and now Gotthold wants more money. The elder Johann decides not to give Gotthold any more funds.

Years later, the Buddenbrooks have another daughter and send Tony off first to visit her relatives the Krogers and then to boarding school. The elder Johann dies leaving the business to the Consul. Thomas, expecting to follow his father into the family business, leaves school to join his father. Tony vacations in the nearby town of Travemunde and meets a young medical student named Morten. They fall in love but her father wants her to marry a merchant named Grunlich. Believing that it is her family duty to marry Grunlich, she leaves Morten. After living together for a while and having a daughter with Grunlich, the Consul learns that Grunlich has only married his daughter to pay off debts and now he wants the Consul to pay off more of his debts. The consul feeling guilty for putting Tony in this position and takes her and her daughter Erica home and divorces Grunlich.

In 1848 there is an uprising in the town, but the Consul, through force of will and the power of his reputation, settles the mob and prevents any more disturbance. Shortly after this, the Consul dies and leaves the business to his son Thomas. Thomas is an able businessman, though he lacks the religious devotion and virtue of his father. His brother, Christian, has no interest in business and prefers to spend his time in the theaters and bars of London and Chile. Thomas marries an old school friend of Tony's from Amsterdam, Gerda. He grows the business well and Christian returns to the town from abroad. Tony travels to Munich to stay with friends and meets a hop merchant named Alois Permenader. She later marries the man and moves to Munich. Thomas and Gerda have a son named Johann (Hanno), though he is sickly. Immediately after receiving Tony's dowry, the hop dealer quits his job to live and drink off the money. Tony leaves him when she finds him attempting to rape the servant after a night of drinking.

Thomas is elected senator and expands his business further. He builds a new house for his family on Broad Strasse, much larger than the other house. Thomas's mother dies a painful death and the two brothers quarrel after her death. Thomas is alienated from everyone except his sister Tony. Hanno grows up to be a sickly child that is only interested in music. Thomas despairs and loses interest in life. He dies from a stroke after an unsuccessful tooth extraction. Gerda sells the home on Broad Strasse and Thomas has already sold the house on Meng Strasse. Christian marries a woman in Hamburg before being committed to a mental asylum. Gerda and Hanno move outside the town gates. Hanno dies of typhoid fever a couple of years after this father and Gerda moves back to Amsterdam. Tony is the only Buddenbrook left in the town and the last of her family.

More summaries and resources for teaching or studying Buddenbrooks.