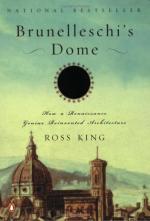 Ross King
This Study Guide consists of approximately 44 pages of chapter summaries, quotes, character analysis, themes, and more - everything you need to sharpen your knowledge of Brunelleschi's Dome.

This detailed literature summary also contains Topics for Discussion and a Free Quiz on Brunelleschi's Dome: How a Renaissance Genius Reinvented Architecture by Ross King.

This work of non-fiction describes the history of the city of Florence and life at the end of the Middle Ages through the genius of Filippo Brunelleschi. The book describes the building of Santa Maria del Fiore and the numerous competitions held to find the best designs for her dome and its construction. It also tells of the lives of those connected with this project and its main capomaestro, Filippo Brunelleschi.

The book begins by giving information about the historic competition that led to the impressive dome that sits atop Santa Maria del Fiore. It then gives an account of the history of Florence in the late 1300s and early 1400s and the building of the cathedral and the initial competition for the dome's design. This initial design is treated as a religious artifact, and therefore is an important feature throughout a majority of the book. After providing information about Florence and the cathedral, Ross King gives background information about about Filippo Brunelleschi, his experiences as an artist and scientist in both Florence and Rome, and insight into the architect's personality and rivalry with Lorenzo Ghiberti. Filippo Brunelleschi is a known, hot-headed trickster is a master of illusion that spends almost thirteen years in Rome studying the ruins; this study is significant in the designs of the dome he later builds. King then allows the reader to visualize life on the work site and the magnificent machines and designs created by Filippo to build the dome. His designs revolutionize the the world of science and architecture.

This is a work of non-fiction, and life does not exist without hardships and disappointment. Kings tells stories of Filippo's failed designs and tainted reputation, as well as aspects of Filippo's personality that are less than appealing. His design for a boat to bring marble down the Arno and his plan to surround the town of Lucca with water are both monumental failures. Although he gains many critics, he is able to rebuild his reputation with more innovations for the cathedral and is successful at building the entire dome without centering.

Ultimately, Filippo's life and work is triumphant, and that is how the book ends. Filippo is the first architect who receives recognition as a genius in a time when architects and most artists were simply skilled laborers. Poems, books, and art are created to honor him, and artists such as Michelangelo come to study his dome. King ends the book by reminding the reader of the work done on the dome and describing in detail a visitor's experience traveling up the enormous dome, a work of genius that the author believes in nothing short of miraculous.

More summaries and resources for teaching or studying Brunelleschi's Dome: How a Renaissance Genius Reinvented Architecture.