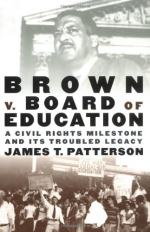 Brown v. Board of Education Summary & Study Guide includes comprehensive information and analysis to help you understand the book. This study guide contains the following sections:

This detailed literature summary also contains Topics for Discussion on Brown v. Board of Education by James T. Patterson.

The lead up to the Supreme Court decision on May 17, 1954, known as Brown v. Board of Education was preceded by literally decades of discrimination against black Americans. While discriminatory practices were evident in all states of the union, the most egregious violations of human rights were found in the Deep South. Black men who had served in World War II and risked their lives defending America were met with only dim futures when they returned. Discrimination was found across the board from employment opportunities to housing restrictions. It was partly this egregious treatment of military men that sparked the dawn of activism.

The bias was more “polite” and subtle in the northern and border states. In the south, the discrimination against blacks was overt and ugly. Blacks had to live with Jim Crow and deal with the specter of Plessy v. Ferguson that loomed over them as well as other methods and practices devised by white supremacists that repressed black people. By keeping blacks from voting, disallowing them to live in neighborhoods where their children could go to good schools and forcing restrictions on them that prevented them from having free and prosperous lives, blacks would not be a threat. Under-educated blacks would not take jobs away from whites. Black men, who were forced to stay away from white women, would not tamper with the superiority of the white race and would not stain it with “mixed” children.

While adult blacks suffered throughout their lives with low pay, racism in all forms, struggles to support their families and little hope for a future that would be any better for their children, there came a point starting in the 40s and growing in the 50s that they began to demand a better life for their children in the golden land of prosperity and opportunity. Black activism was on the rise in the late forties and early fifties. The activists and parents of black children didn’t have to think long and hard about how to ensure that black children would have an better and more prosperous life than they had -- in a word: education.

Looking back from 2015, it’s difficult to believe that black children were not allowed to attend “white” schools in a time that what is really just the recent past. But it was true and despite the passage of Brown v. Board of Education in 1954, desegregation lingered on well into the 60s and 70s and beyond.

Attorney Thurgood Marshall was an attorney during the years of open discrimination and desegregation. He founded the Legal Defense and Education Fund of the NAACP (or Fund) in 1940 and began to gather evidence of discrimination. Initially, the goal in the litigation of the five cases he and his team of Fund lawyers focused was to rectify minor injustices. They realized that what they had was much bigger than a kid not being able to ride a bus or a black college student having to sit in an ante-room while white students sat in the classroom. They finally wrapped their minds around the core issue. In order for black children to have the chance for the golden ring, a fair chance to have a bright future they had to have a good education and that was not possible under current segregation laws and practices.

But segregation went far beyond schools. Marshall and his team decided to take on segregation en masse by going after it in the nation’s educational system. The only answer that would rectify the current state of education for black children was to outlaw segregation in the schools. It was a huge undertaking and challenge. They felt they had a winner by basing their case on constitutional law. Under the Fourteenth Amendment of the U.S. Constitution, it was unlawful for any person to not be treated equally by any government entity in any state in the nation. Everyone was entitled to equal protection by the Federal government. Marshall and his team of lawyers grabbed onto that defense and carried it through all the way to the Supreme Court.

Five lawsuits were combined by the Supreme Court which came to be known as Brown v. Education. While there was apprehension and uncertainty about how to proceed even among the justices, in the end they knew it was their duty to intervene and take this first giant step that would lead to desegregation in schools and ultimately bleed over into other areas of American life like employment and housing. On May 17, 1954, the Supreme Court ruled that segregation of any group of people in public school systems was a violation of the Constitution. The decision met with great resistance as did Brown II which was the implementation phase of the decision. Violence, intimidation, bombs and death threats were all part of the reaction to the decision. In the end the rule of law was victorious but it wasn’t an easy victory and struggles go on even in current times.

Brown v. Board of Education from BookRags. (c)2022 BookRags, Inc. All rights reserved.