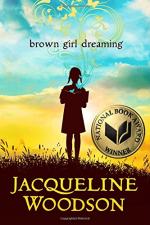 “Brown Girl Dreaming” is a memoir by Jacqueline Woodson. She tells of her childhood as an African American in the American Northeast and South in the 1960s. Born in Columbus, Ohio, to the descendants of former slaves, Jacqueline is named after her father, Jack, much to the chagrin of her mother, Mary Ann. Jacqueline soon comes to be called Jackie. While Jackie’s early years are spent in the North, frequent trips are made to the South for Mary Ann to visit her parents as well as Grandpa Gunnar and Grandma Georgiana, who live in the Nicholtown area of Greenville, South Carolina. Mary Ann deeply loves the South, but Jack cannot understand why feels that way. The region is segregated and the people are racially-charged. Their very different feelings about the South causes arguments between Jack and Mary Ann. Eventually, Jack and Mary Ann split, and Mary Ann and her three children, Hope, Odella, and Jackie, move south to live with her parents.

In South Carolina, Jackie comes to love the land, the air, her neighbors, and her grandparents all very much. While racism and segregation exist there, the place is still home to Jackie’s grandparents. They will not leave it for anything. They are totally in favor of peaceful protest marches for civil rights. They know that God will bless them for doing the right thing.

Despite widespread animosity, there are white people in Greenville who are respectful and treat Jackie and her family like actual human beings, rather than dirt. One such woman is the never-named owner of the local fabric store, who has known Grandma Georgiana for years. Mary Ann, however, decides she wants to move back North. So, she travels to New York City to get settled. Jackie and her siblings stay on with their grandparents, relishing the time they have with them, until Mary Ann comes to retrieve her children, with a brand new baby boy in tow.

In New York, Jackie becomes best friends with a Puerto Rican girl. She also decides that she wants to become a writer. It is the one thing she loves to do, and she knows that she is good at it. Each summer, Jackie and her siblings return to South Carolina to visit their grandparents. However, each time finds Grandpa Gunnar, a heavy smoker, less and less healthy. In New York, the afro have come into style, and Mary Ann’s baby brother, Robert, sports one. He ultimately gets in trouble with the police. He is sent to prison. He returns to society as a Muslim. About the same time, Jackie and Maria come to admire Angela Davis of the Black Panther movement. They imitate Angela, though they have no real idea about the revolution in which she is involved. Grandpa Gunnar ultimately dies of cancer, and Grandma Georgiana moves up to New York to be with Mary Ann and the grandchildren. At school, Ms. Vivo tells Jackie that she is indeed a writer. Jackie is thrilled as she makes plans to fulfill this dream.