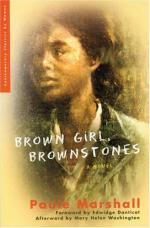 Paule Marshall
This Study Guide consists of approximately 40 pages of chapter summaries, quotes, character analysis, themes, and more - everything you need to sharpen your knowledge of Brown Girl, Brownstones.

This detailed literature summary also contains Topics for Discussion and a Free Quiz on Brown Girl, Brownstones by Paule Marshall.

Selina Boyce is the younger daughter of a family of immigrants from Barbados. In the 1930s, the Boyce family lives in a brownstone house in Brooklyn, which they share with several other tenants. Like other immigrants from the West Indies, the Boyces hope to someday buy a house as the ultimate status symbol that they have made it in America.

Ten-year-old Selina does not get along with her harsh, shrewish mother, Silla, who is always yelling and complaining about everyone. Instead, Selina enjoys spending time with her happy-go-lucky father, Deighton. Deighton is charming and fun-loving, and he is always half-heartedly training for some career, which never seems to work out. Silla works hard cleaning houses, complaining that her husband is a lazy adulterer, her daughter Ina is a sneak, and Selina is tomboyish, loud, and contrary. Years ago, they also had a baby boy who died, and Selina always feels that her mother wishes Selina were her son. One day, Deighton receives news that he has inherited a plot of land in Barbados. Silla immediately urges him to sell it so they can buy their house, but Deighton wants to hold on to the land. They argue for months, and finally, Silla vows that she will find a way to get that money.

When World War II breaks out, Silla goes to work in a defense factory. She forges Deighton's signature and sells the land behind his back. When the money comes from the sale of the land, Deighton blows all of it in a shopping spree for his family, buying fine clothes and toys. Silla is enraged.

One day, Deighton is in an accident at the factory where he works, and he loses the use of his arm. When he returns from the hospital, he seems detached from reality, and he only talks about Peace. Eventually, Selina discovers that her father has joined a cult called the Peace Movement, who worship a man named Father Peace as God. Deighton tells his family that he is moving out to live with the Peace Movement. Silla is so angry that she sends the police after him in order to deport him as an illegal alien and send him back to Barbados. On the way there, he jumps overboard and drowns.

Silla tries to get Selina to go to college, become a doctor, and join the Barbadian Association. Selina hates the hypocrisy and clannishness of the Association, but she meets a man there named Clive and loses her virginity to him. Selina decides that she will work hard for the Association's scholarship and will use the money to run away with Clive. Although she wins it, she refuses to accept, knowing she does not deserve it. Instead, she decides to let her dancing skill and her wits support her, and she embarks alone into the world as a young woman.