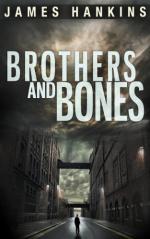 In Chapter 31, Charlie wakes up late in the afternoon, then realizes he doesn't know what to do next. He thinks about Jake's last words, then looks through Jake's notes. He checks the phone he'd used to call Jessica. He calls her back and she demands an explanation when she picks up. She tries to believe his story, but wants him to turn himself in. Bonz coms out of the bathroom and Charlie hangs up. Bonz suggests that they start pressuring people for information.

In Chapter 32, Charlie continues to try and figure out what his brother meant. They both go to a library to gather information, but find nothing. Charlie winds up telling Bonz that he cheated on an IQ test when he was very young. He's never told anyone that before. As they prepare to leave, to policemen enter.