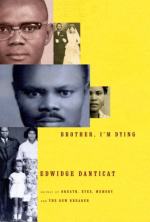 Edwidge Danticat
This Study Guide consists of approximately 33 pages of chapter summaries, quotes, character analysis, themes, and more - everything you need to sharpen your knowledge of Brother, I'm Dying.

The following version of this book was used to create this study guide: Danticat, Edwidge. Brother, I’m Dying. New York: Alfred A. Knopf, 2007.

Brother, I’m Dying follows the lives of Edwidge Danticat’s father and uncle. The book opens in 2004, when Edwidge’s father, Mira, was diagnosed with pulmonary fibrosis and was given a prognosis of less than two years left to live. On the same day that Mira received this prognosis, Edwidge discovered that she and had become pregnant. The narrative then shifts back several decades to exposit upon the life of Mira’s brother, Joseph. Mira and Joseph were born in a rural area of Haiti and both moved to Port-au-Prince. Joseph married and became a preacher. Unfortunately, years later, he developed a tumor in his throat and had to have his larynx removed, thereby losing his ability to speak. Mira became a tailor and a shoe salesman. After he and his wife gave birth to two children—Edwidge and Bob—Mira and his wife immigrated to America to start a new life there. They left Edwidge and Bob in Joseph’s care for a few years.

During the years that Joseph raised Edwidge and Bob, he became like a second father to them. In addition to Edwidge and Bob, Joseph and his wife Denise raised their son Maxo and their adopted daughter Marie. In America, Mira and his wife had two more sons—Kelly and Karl. Mira was eventually able to bring Edwidge and Bob to America as well. In America, they lived in Brooklyn, and Mira worked as self-employed a cab driver. In the 1980s, Joseph acquired an artificial voice box, which restored his ability to speak. In the 1990s, political tensions began to grow in Haiti. Joseph’s wife Denise, now in her early eighties, died. Political tensions began to grow violent between several armed factions, including armed battalions sent by external governing organizations.

As political tensions began to grow increasingly violent, Joseph found that he was no longer safe in Haiti. He boarded a plane to America, and despite having a valid entry visa, he was sent to an immigration detention center. He was 81 years old at the time. He received extremely poor medical care while being detained, and he died in custody. Edwidge and Mira both grieved the death deeply. Edwidge gave birth to her daughter and named it Mira after her father. Mira was euphoric to be able to meet his granddaughter before he died. He died a few months after his granddaughter’s birth. Edwidge grieved her father’s death, and she found herself often picturing Mira and Joseph spending time together in the afterlife.