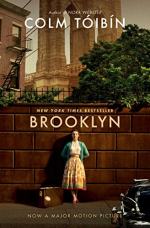 Colm Tóibín
This Study Guide consists of approximately 40 pages of chapter summaries, quotes, character analysis, themes, and more - everything you need to sharpen your knowledge of Brooklyn.

NOTE: Due to the structure of this novel, this study guide references page numbers rather than paragraph numbers. This study guide specifically refers to the September 2015 Scribner Trade Paperback Edition of “Brooklyn” by Colm Toibin.

“Brooklyn” is a historical romance novel by Colm Toibin that follows young Irish immigrant Eilis Lacey’s settling in, and romantic experiences in Brooklyn. When the novel begins, World War II has not been over for long. Work is hard to come by in Ireland, especially in small towns like Enniscorthy where Eilis has been born and raised. In her late teens or early twenties, Eilis is studying bookkeeping and only hopes to one day have steady work, like her older, beautiful sister, Rose. Rose works for the offices in Davis’s Mills, while their three brothers have gone to England to find work with their father dead and their mother in poor health. Eilis fully expects to soon be married and raising a family in her hometown.

When Father Flood, a native Irishman who has moved to Brooklyn to head up a local parish there comes back to visit Enniscorthy, Rose invites him over for dinner. Knowing that Eilis’s prospects are grim, Father Flood and Rose both encourage Eilis to allow Father Flood to sponsor her in Brooklyn, where she may take on work at Bartocci’s department store while continuing her education. Eilis agrees after her mother gives her blessing upon learning that Father Flood’s parish is safe and friendly. A few months later, Eilis sets sail for New York.

Eilis takes up a room at Miss Kehoe’s boarding house, where Miss Kehoe becomes something of a second mother to her, and where Father Flood continues to check up on her. Eilis begins work as a salesgirl at Bartocci’s, knowing that the possibility for advancement is great. She is anxious to work hard and make something of herself. Although Eilis does go through a period of homesickness, she quickly falls in love with Brooklyn and with the idea of being an American. She assists Father Flood at the local Church, such as during Christmas dinner. She begins attending night classes to continue her education, as her tuition is fully paid for by a fellow Catholic parishioner seeking to do a good deed.

While attending a Church charity dance, Eilis meets a young American man named Tony Fiorello, born and raised in Brooklyn while his parents immigrated from Italy. Eilis and Tony quickly hit things off. Eilis is impressed by how hard Tony works as a plumber with his brothers, while Tony is impressed that Eilis is so serious about her education. The two ultimately fall in love with one another, and begin speaking of marriage. At first, this worries Eilis because everything seems to have happened so fast, but she ultimately comes to realize that she truly does want to marry Tony and raise a family with him. Tony explains that ultimately, he and his brothers want to move out to Long Island where they will buy a plot of land and build their houses beside one another. They will also begin a construction business that Eilis could benefit with her bookkeeping skills. Eilis ends up thrilled with this idea.

Word suddenly comes, however, that Rose has died in her sleep of a bad heart. Eilis must return to Ireland to visit her mother and pay her respects. Tony worries that Eilis may not return, so he asks her to marry him before she leaves. She agrees. Back in Ireland, Eilis at first does not consider the place to be home anymore, but upon spending time with her mother and her old friends, she begins to feel at home and begins to wonder if her marriage was a mistake. She even begins going around with a local guy named Jim, because no one know she is married. At last, Miss Kelly, who owns the local grocery store, gets word from friends in New York that Eilis is married. She confronts Eilis with this fact, which sets Eilis straight. Eilis quickly returns to Brooklyn, knowing that her heart is truly with Tony in America.

More summaries and resources for teaching or studying Brooklyn (novel).