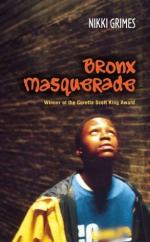 Nikki Grimes
This Study Guide consists of approximately 28 pages of chapter summaries, quotes, character analysis, themes, and more - everything you need to sharpen your knowledge of Bronx Masquerade.

This detailed literature summary also contains Topics for Discussion and a Free Quiz on Bronx Masquerade by Nikki Grimes.

Tyrone is an angry kid. He does not care about school. The only reason he goes to school is for his friends. He wants to be a hip-hop star, but he does not think he will live long enough to do so. His father died before he was 30 years-old in a drive-by shooting. His father had become clean and sober before he died so Tyrone has some good memories of him. Tyrone loves to read his poetry. He reads at every Open Mike Friday. Tyrone is the main character in this book of 18 characters. Tyrone comments after every poem is read. He has a comment for everything. Tyrone is also a character in the sense that he says really funny things and has a good sense of humor.

Tyrone is distrustful of white people though. He thinks they do not know him nor can they relate to him. He seems almost racist until he starts to become friends with a couple white kids. In particular, he lets Steve, a white kid, rap in his crew. This is a huge step for Tyrone. Tyrone's feelings really come out when he speaks in front of the assembly and says the poetry makes him feel connected to his classmates and he realizes they are not that different. He almost gets choked up and he seems to be speaking for the entire class.

Wesley "Bad Boy" Boone is an important character because he begins the Open Mike Fridays and introduces poetry to the entire class. Without Wesley being the poetry pioneer, the other kids would not have asked to read their poetry. Wesley does not like to do homework. He makes up excuses. He is also a protector. He looks after his friend Tyrone to make sure Tyrone goes to school. Wesley sees the value in school, even though Tyrone does not at first. As a homework assignment from Mr. Ward's class, Wesley must study the Harlem Renaissance. He ends up loving it and loving the poetry of Langston Hughes. He chooses not to write an essay on Hughes, but instead, he writes a tribute poem about Hughes and how great of a poet he is. Wesley is a risk taker for not handing in the essay and for presenting his poetry to Mr. Ward.

Wesley's risk is worth it. Mr. Ward surprises Wesley and asks him to read his poem to the class. Wesley is embarrassed at first, usually not in his nature, but he does not want the other kids to laugh at him. He reads and they do not. Wesley feels goods about himself. This inspires the other kids to bring in their poetry and read. Wesley is an important character because he sparks the class's love for poetry. Though only one section of the book is dedicated to him, he is always in the background as Tyrone's best friend and he gives advice to Sheila to be true to herself. Wesley is almost like a wise sage. He is also a poetry pioneer.

Mr. Ward is the teacher for this high school English class. It is his idea to have Open Mike Fridays, so the kids can read their poetry. He believes in his students and wants them to be high achievers.

Chankara gets beat up by a boy, but she throws him out of her house. She will not be like her sister, who has a physically abusive boyfriend. Chankara does not want to be in the cycle of abuse.

Raul is a painter and poet. He likens himself to Diego Rivera. He wants to paint and write about the beauty of his Puerto Rican culture.

Diondra is six feet tall and shy. People think she should play basketball, but she is secretly an artist. She gets teased for not being good at basketball.

Devon is a good basketball player. He is also very handsome. Devon pretends to practice basketball, but he really goes to the library to read poetry. He hides his love of poetry to fit in with the other boys.

Lupe Algarin adores her niece, her sister's daughter. Lupe wants to have a baby to feel loved. Her mother and her mother's husband only care about themselves and Lupe's siblings have all moved out.

Gloria is a teenage mother with a baby named Angel. Gloria loves him, but life as a teenage mom is hard. Her schoolwork suffers. She strives to graduate high school and go to college.

Leslie Lucas is a white girl from the suburbs. She feels she has nothing in common with her black and Hispanic classmates. She is lonely because her mother died and she had to move to the Bronx and live with her grandmother. Loneliness consumes Leslie.

Judianne loves to design and sew her own clothes. She has low self-esteem because she believes her bluish-black skin and hair are ugly. Her stepfather makes fun of her looks and her mother does not defend her.

Tanisha is a gorgeous, black girl. She is the envy of all the other black girls. She has light skin and hair and green eyes. She has good hair. Her beauty causes negative attention such as boys hitting on her and girls hating her. She tries to downplay her looks, so people can see the real her.

Sterling wants to be a science teacher, plays guitar and loves God. He lives his life by praying and believing in God. He sees his mother get everything she needs because she prays to God. He likes the poet Reverend Pedro Pietri because he writes about God and the street.

Amy is Jewish. Her parents divorced and her mom left her and her father to start another family. Her father and she become tough and cold to not get hurt again. But Amy is now too cold and does not know how to make friends.

Steve is a white kid who loves hip-hop. He wants to be a Broadway set designer. He works toward getting good grades to get into NYU and become a set designer. He is upset because his parents want to move out of the city. Nothing will deter Steve from his Broadway dream.

Raynard does not read his poetry aloud. The kids think he is stupid, but he has been hiding a secret: he has dyslexia. He finally gets the courage to read his poem about dyslexia in front of the class.

Porscha had been bullied last year for nine months. She beat up her bully after nine months of torture. Kids are scared of her. Porscha says she is nonviolent, but the cycle of abuse runs in her family. Her mother abused her. Her mother died of an overdose and Porscha lives with her grandmother.

More summaries and resources for teaching or studying Bronx Masquerade.