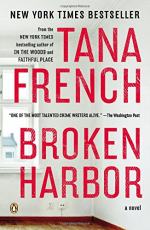 The following version of this book was used to create this study guide: French, Tana. Broken Harbor. Penguin, 2012.

Detective Mick “Scorcher” Kennedy had only been working with his young new partner Richie Curran for a few weeks when Superintendent O’Kelly assigned them the Spain case. The Spains were a married couple, Jennifer and Patrick, with three-year-old son Jack and six-year-old daughter Emma. They had been attacked during the night, the adults stabbed and the children suffocated, and only Jennifer had survived, albeit in critical condition. The partners drove out to Brianstown, formerly known as Broken Harbor. Kennedy had been there often as a child for vacations in a seaside caravan park, but now the coast had been developed into an enormous housing estate named Ocean View. Following the recession, it had been abandoned, the looming, identical houses now almost all stood empty. The Spains’ home struck Kennedy as immaculately clean, though there were strange holes knocked into the walls here and there. They interviewed Jennifer’s sister Fiona, and she told them that the Spains had been a happy family, though Jennifer had noticed small things going missing and suspected someone might be breaking in.

Kennedy sent a group of detective assistants to search for the murder weapon, then interviewed the unpleasant, unhelpful neighbor Sinéad Gogan, who gave them little information. Afterward, a tech told them that they had found some vicious looking animal traps set up in the attic. They were going through the Spains’ financial papers, which showed a steep decline in their fortunes after Patrick was laid off six months before, when they were told a strange observation nest, complete with sleeping bag and binoculars, had been found in a neighboring abandoned house. Though he had been theorizing a murder-suicide perpetrated by Patrick, Kennedy began to suspect a stalker could have committed the crimes. When they were told the computer browsing history had been wiped by someone with more know-how than the Spains, and that bloody shoeprints indicated a stranger had been there the night of the murder, this theory seemed even more likely.

Kennedy had planned to stakeout the nest with Richie, but when they arrived at HQ in Dublin Castle his younger, troubled sister Dina approached him in a manic episode. He told Richie to conduct the stakeout himself and brought Dina back to his apartment. They spoke until she fell asleep. In the morning he met up with Richie for the post-mortem in the morgue, and afterward they got a call alerting them that Jennifer was awake in hospital. However, when they arrived she was distraught and heavily sedated, so she gave them no new information. Then it was time for the stakeout. After a few hours of sandwiches and exchanging case theories, the stalker appeared, drawn by a cop they had disguised to look like Fiona puttering around the Spain house.

They arrested him and took him to HQ for interviewing. Richie, who had a natural gift for empathizing with witnesses and suspects, started it off. The man introduced himself as Conor Brennan. He was around the Spains’ age, painfully skinny, and worked as a freelance web designer, though the recession had greatly reduced his amount of work. He claimed that he only had been watching the Spains because they seemed so happy and he felt lonely. Kennedy entered, feigning having gotten a phone call that said Jennifer was alive and ready to tell everything, but if Conor confessed then he might get a reduced sentence. After a pause, Conor told them he was the killer, and that he had regularly been breaking into the Spains, but something rang false about his confession. Kennedy left to get much-needed sleep, and he was woken in the morning by a call from a computer tech. He had recovered links to a forum called Wildwatcher that Patrick had been posting on in an attempt to figure out if there was an animal living in his house. It had been making noises and leaving a musky smell, though Jennifer hadn’t noticed it at all. They then went to investigate Conor’s apartment, finding a box of trophies from his break-ins to the Spains’ home, and finally returned to Brianstown to re-interview the Gogans. Sinéad’s young son admitted he had sold a copy of his key to a man fitting Conor’s description, and the detectives discovered that it also fit the lock in the Spains’ back door.

Back at HQ, Kennedy interviewed Fiona. They had found a photo of a teenage Conor with her and the young Spains, and she confirmed that they had been a group of childhood friends. She always suspected he had been in love with Jennifer, but she was horrified and disbelieving when they told her they had arrested Conor for the murders. Kennedy went home and found Dina there, though she had promised to stay with their older sister Geri. Kennedy told her he couldn’t look after her during the case, and she told him she was worried about his emotional investment in it. Back when Brianstown was Broken Harbor, their mother had killed herself by swimming out into the sea, almost taking five-year-old Dina with her. Kennedy became furious with Dina, who then threatened to kill herself too and stormed out of the apartment. After a fitful night, Kennedy woke to yet more posts by Patrick on hunting forums, this time in a more panicked, obsessive tone. He and Richie decided to interview Jennifer again, and this time they felt she was actively hiding something from them.

Back at HQ, Kennedy decided it was time to interview Conor about the real nature of his relationship with the Spains. He had been best man at their wedding and godfather to Emma, but after he told them they were making a mistake by investing so much money in the Ocean View house, they had grown apart. When his work dried up, he had started watching them. Losing his cool, Kennedy accused him of having an affair with Jennifer, though Conor strenuously denied it. Richie took a different angle and asked if he was protecting Patrick, but Conor still insisted that he himself was the killer. Kennedy had a fitful night of sleep before returning to HQ, where he was accosted by the particularly slimy Detective Quigley. Dina had been there that morning with an evidence bag from the case. On the bag, in Richie’s handwriting, was a label marked “collected sitting room, residence of Conor Brennan,” and it contained a woman’s manicured fingernail, ripped at the quick with a wisp of pink wool stuck in a crack (366). Because it had been out of police custody, it could no longer be used, but in Kennedy’s eyes it pointed to Jennifer as the killer. When he confronted Richie about it, he told him he had reached the same conclusion, but felt Jennifer had gone through so much already that they should pin the murders on the dead Patrick. Kennedy was furious and told the younger partner that he would be reverted back to uniform.

Kennedy went to interview Jennifer by himself. Under condition that the interview couldn’t be used as evidence, she told him the story of how the stress and strain of Patrick’s unemployment had gradually made him become obsessed with an imagined animal in their house. She herself had also begun to lose her grasp on sanity, and one night her madness had finally spilled over. When she murdered her family, she felt she was helping them escape, and she still wanted bitterly to go to them. Realizing Jennifer would kill herself the first chance she got, he told Fiona that her only chance of saving her sister would be to help him send her to prison where she could get the mental health help she need. Because he had lost the evidence packet, he need Fiona to pretend to find a bracelet of Jennifer’s with a lock of Emma’s torn hair tangled in it. They falsified the evidence and Kennedy explained things to O’Kelly. He also told him that it was time he retired. He went searching for Dina, and when he found her at his apartment they both fell together into the exhausted sleep of children.