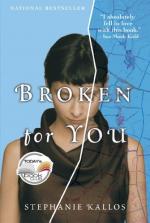 Broken for You Setting & Symbolism

Stephanie Kallos
This Study Guide consists of approximately 25 pages of chapter summaries, quotes, character analysis, themes, and more - everything you need to sharpen your knowledge of Broken for You.

A kind of theater which first began in Italy during the sixteenth century.

Ceramic dinnerware which first became popular during the 1930s.

A town located in Ireland.

A city located in Georgia.

Latin for "god out of the machine," the term is used to describe a literary plot device whereby a narrative problem is solved by some sort of coincidence.

Formerly known as Theresienstadt, Terezin is located in the former Czech Republic. Terezin was a Jewish ghetto during WWII.

More summaries and resources for teaching or studying Broken for You.

Broken for You from BookRags. (c)2022 BookRags, Inc. All rights reserved.