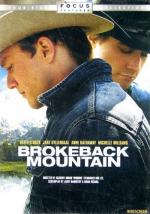 Joe Aguirre, the foreman of the ranch that hires Ennis and Jack to herd sheep on Brokeback Mountain, considers the two to be a [p]air of deuces going nowhere. He spies on them through binoculars, watching their lovemaking. His disgust over their homosexuality prompts him to refuse to rehire Jack the following summer. Joe's attitude foreshadows the prejudice the two will encounter as they continue their relationship.

Alma Del Mar is present to show Ennis's failure to adopt a conventional heterosexual life. She adds to Ennis's sense of shame with her misery voice and her growing resentment over his relationship with Jack and his emotional distance from her and their children.

Nineteen-year-old Ennis Del Mar accepts a herding job on Brokeback Mountain in Wyoming so that he can earn enough money to marry Alma Beers. He was forced to drop...