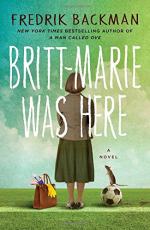 Fredrik Backman
This Study Guide consists of approximately 78 pages of chapter summaries, quotes, character analysis, themes, and more - everything you need to sharpen your knowledge of Britt-Marie Was Here.

This detailed literature summary also contains Quotes and a Free Quiz on Britt-Marie Was Here by Fredrik Backman.

NOTE: All citations in this Study Guide refer to the Atria Books version of Britt-Marie Was Here, published in 2014.

Britt-Marie, a lady with an obsession for cleaning and proper manners, turns out to be an unusual heroine in the novel Britt-Marie Was Here by Fredrik Backman, a rollicking novel about financial troubles, soccer and new beginnings. Without intending to, Britt-Marie brings hope to the small town in which she finds herself working after she leaves her cheating husband. In turn, the people of this unique village help give Britt-Marie the courage, as well as the gasoline, that she needs to follow her own dreams.

Britt-Marie is hired to work as the caretaker of the recreation center in Borg, a small village hard hit by a financial crisis, a crisis that Britt-Marie’s husband has told her is over. The people of Borg, however, are still suffering from the crisis. All of the businesses with the exception of a pizzeria that serves as a post office, corner market and car workshop, and the recreation center, have been closed.

Although Britt-Marie wants nothing more than to go back her normal life, she is thrust into a life she never imagined. The children of the town persuade her to be their soccer coach so they can compete in an upcoming competition. Just as the people have lost hope that their town will recover from the financial crisis, they have also lost hope in their small soccer team made up only of players who did not transfer to the team in town when the soccer field in Borg was sold. They complain the team is no good.

Even though the team is not the best, the children are determined to participate in the tournament. They do not win but are ecstatic when one game ends in a tie, the first time the team in Borg has not lost a game in a long time. The simple act of the team going to the competition stirs a new hope in the village, as the people rally behind the players.

The town becomes even more united when Sami, the older brother of two of the players, is killed trying to stand up for his friend, Psycho, even though Psycho does not deserve Sami’s loyalty. Because Britt-Marie lost her own sister in a car wreck, she understands how devastating the loss of a sibling can be. Vega, Sami’s sister, once told Britt-Marie she did not feel pain when she was playing soccer. For that reason Britt-Marie campaigned to get a soccer field built in that town.

Meanwhile, Britt-Marie’s husband, who claimed his affair was over, had come to Borg to try to convince Britt-Marie to come home with him. In Borg he discovers that the town policeman, Sven, and Britt-Marie have developed a friendship. Britt-Marie is faced with choosing between the familiarity of her husband and the possibility of compatibility that Sven offers. Just as the reader fears Britt-Marie will go home with her emotionally abusive husband, the children of Borg present her with a surprising third option.

More summaries and resources for teaching or studying Britt-Marie Was Here.