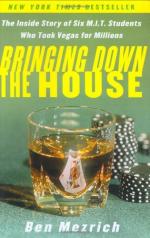 Bringing Down the House: The Inside Story of Six MIT Students Who Took Vegas for Millions Summary & Study Guide

Ben Mezrich
This Study Guide consists of approximately 34 pages of chapter summaries, quotes, character analysis, themes, and more - everything you need to sharpen your knowledge of Bringing Down the House.

Bringing Down the House: The Inside Story of Six MIT Students Who Took Vegas for Millions Summary & Study Guide Description

Bringing Down the House: The Inside Story of Six MIT Students Who Took Vegas for Millions Summary & Study Guide includes comprehensive information and analysis to help you understand the book. This study guide contains the following sections:

This detailed literature summary also contains Topics for Discussion and a Free Quiz on Bringing Down the House: The Inside Story of Six MIT Students Who Took Vegas for Millions by Ben Mezrich.

From c. June 1994 to c. June 1998 Kevin Lewis, an MIT graduate student, joins forces with other MIT students to operate an organized card-counting team. The team makes weekend trips to Las Vegas and other casinos and uses a variety of strategies to beat the casinos at their own game. Lewis and the other team members split the winnings and make a fortune, until they are identified by casino security and invited to leave the premises for good.

The book is essentially a biographical portrayal of about four years in the life of Kevin Lewis; the book also contains many elements of fiction. For example, Kevin Lewis is a fictionalized and renamed representation of a real person while all of the other characters are composites of more than one real person. Lewis is a graduate student at MIT and is recruited by some of his roommates to participate in a group of organized card counters. The group travels to Las Vegas or some other gambling destination on most weekends and uses a variety of techniques to win at blackjack. Lewis is introduced to the techniques and then trained in their use. He then begins working with the group and eventually becomes one of their best players. Over time, the group's membership changes as older members are excluded and new members are recruited. After about one year, Lewis is the head of his own team within the organization.

Most of the members of the group devote themselves entirely to counting cards and gambling at blackjack, but Lewis pursues a professional career outside of gambling. Some of his team members also hold down normal jobs. At time goes on, a natural rift develops between the full-time gamblers and the weekend gamblers, and eventually Kevin is excluded from the group. He takes a few team members with him and they continue operating on their own. Occasional conflict occurs when members of the various teams encounter each other in casinos.

Eventually the casino security teams wise up to the teams' unnatural luck and begin to investigate individual team members. The strategy of playing in teams proves successful, however, and it takes quite some time for most casinos to realize who the various team members are. Because card counting is, technically, not cheating those detected are not arrested—but they are excluded from the casino, permanently. After several years Lewis has been excluded from numerous casinos and his face is well-known. Meanwhile his professional career is burgeoning and he finally and reluctantly decides to give up card counting. At that time he contacts Ben Mezrich, the author, and the two collaborate to create the current book.

More summaries and resources for teaching or studying Bringing Down the House: The Inside Story of Six MIT Students Who Took Vegas for Millions.

Bringing Down the House: The Inside Story of Six MIT Students Who Took Vegas for Millions from BookRags. (c)2022 BookRags, Inc. All rights reserved.