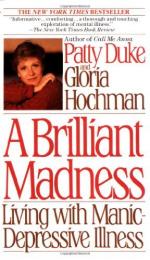 Patty Duke
This Study Guide consists of approximately 41 pages of chapter summaries, quotes, character analysis, themes, and more - everything you need to sharpen your knowledge of Brilliant Madness.

A Brilliant Madness: Living with Manic-Depressive Illness is an illuminating combination of the personal story of Patty Duke's fight with this mental illness and a clinical approach that helps define some of the medical aspects of the illness. Patty Duke has suffered episodes of mania as well as depression since her late teens, but did not know the name of her illness until she was thirty-five. The diagnosis could have been a time of great stress for Patty Duke, but instead it was a time of celebration because she finally had a name for her moods and definitive proof that she was not insane. Patty Duke's illness not only had a name, but a treatment that brought calm and stability to her life for the very first time. Patty Duke shares her story to help others who suffer in the dark of the same symptoms that ruled her world, at the same time sharing the authorship of this informative book with Gloria Hochman, a medical writer whose job it was to offer a broader perspective to this oft misinterpreted disease.

Patty Duke began having panic attacks as a small child. Often Patty would suffer these attacks while traveling between the home she shared with her managers, Ethel and John Ross, and her mother's home. While passing a cemetery on this route, Patty would become frightened by the inevitability of her own death. These attacks would often leave Patty unable to make her way home. Later, when Patty was a teenager and the star of her own television show, she would suffer deep depressions that would find her in bed for days at a time. When Patty came of age and was able to move out on her own, the depressions would be preceded by manic episodes during which Patty would not sleep for days on end, would party extensively, and would spend money without restrain. During this time, Patty got married. Patty moods during this marriage would balance between extreme euphoria and deep depressions during which she would often attempt suicide.

Patty Duke's marriage ended after a few turbulent years. Patty's manic episodes became increasingly worse, including one episode in which Patty believed that the White House was being invaded by outside forces and she was the only one who could stop it. Patty traveled to Washington D.C. in order to save the President, realizing in her few, lucid moments how insane she sounded. These mood cycles continued for several years until Patty found herself pregnant. Soon after becoming aware of the pregnancy, Patty married a stranger in the depths of a manic episode only to have the marriage annulled thirteen days later. This is the last of the manic episodes of this degree that Patty remembers. Patty believes that pregnancy and motherhood helped to calm some of her moods.

Eventually Patty married John Astin and settled to a more domestic life. Patty and John had two sons, Sean and Mackenzie, and then took custody of John's three sons from his previous marriage. During this time, John was unable to work in Hollywood due to a writer's strike, so he, Patty, their five children, and Patty's mother went on the road, acting out dramas in small theaters across America. During this time, Patty suffered from deep depressions that made it impossible for her to get out of bed and care for herself or her family. Later, when John and Patty settled in California, Patty would place unnecessary pressure on herself and would often lash out on her children and her husband whenever she felt unappreciated. These episodes would often lead to uncontrolled fits of rage in which Patty would verbally and physically attack her family as well as damage personal possessions and kitchen ware.

During her marriage to John, Patty became acquainted with John's psychiatrist, Dr. Harold Arlen. By the time John and Patty's marriage fell apart, John was no longer seeing Dr. Arlen, so Patty began to visit him. During this time, Patty became ill while on the set of her new television show. To treat this illness, a doctor gave Patty a shot of cortisone. The cortisone precipitated an attack of deep paranoia and gastrointestinal illness. Dr. Arlen learned of this and realized that it was definitive proof of Patty's manic depressive illness. Dr. Arlen told Patty how he had suspected she suffered the illness but that the cortisone injection setting off a manic episode proved it to him. Dr. Arlen put Patty in the hospital and began her on lithium, the accepted treatment for manic depressive illness. Within two weeks, Patty began to feel a calmness that she had never known before. The treatment appeared to be working.

After learning the truth about her mental illness and beginning treatment, Patty began looking back on her life and recognized the symptoms of her illness. This recognition allowed Patty to deal with the emotional baggage of her behavior and the behaviors of others in her life. Patty made amends to her children and the various other people in her life, as well as learning how to forgive those who had done harm to her. Eventually Patty found herself in a place in her life in which she was able to remarry, to adopt a child, and create a happily ever after she had once believed would never be possible for her.