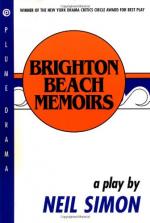 Biloxi Blues, a play by Neil Simon first produced in 1984, is the second in the trilogy begun by Brighton Beach Memoirs. This play focuses on Eugene Jerome's experiences as a recruit in the Army during World War II.

Broadway Bound, a play by Neil Simon first produced in 1986, is the third in the trilogy. This play focuses on Eugene Jerome's quest to become a professional writer.

A Portrait of the Artist as a Young Man, a novel published by James Joyce in 1916, concerns the coming of age of writer Stephen Dedalus.

Our Town, a play by Thorton Wilder first produced in 1938, is a nostalgic look at families living together in Grover's Corner, New Hampshire.

a nonfiction book published by Beth S. Wenger in 1996, discusses ethnic relations, economic conditions and life in the...