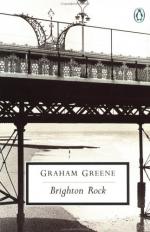 This detailed literature summary also contains Topics for Discussion and a Free Quiz on Brighton Rock by Graham Greene.

Brighton Rock is a murder mystery set in Brighton, England, in the 1930s. This story of a series of gang murders takes the tone of a morality play, concerning a clash between two characters equally obsessed with the relationship of good and evil.

The novel begins with the arrival of Fred Hale in Brighton. He has been sent there by his employer, The Daily Messenger, as part of a summer promotional contest. There, he meets Ida Arnold, a vivacious middle-aged Londoner on holiday, and confides that he is in danger. Moments later, he disappears. Back in London, Ida learns that he has died and suspects foul play. After receiving an invite back to Brighton from a friend, she resolves to investigate further.

Hale has been killed, it turns out, by Pinkie, a sixteen-year-old sociopathic leader of a gang. The authorities have deemed the death one of natural causes, but Pinkie is concerned because a waitress at Snow's saw one of his men, Spicer, planting evidence that Hale ate lunch there. In order to keep Rose quiet, Pinkie takes her on a date and threatens her with acid. As Ida arrives in town and begins questioning Rose, however, Pinkie decides the best course of action is to marry her.

Meanwhile, Spicer is beginning to lose his mind and wants to leave Brighton. Pinkie is also facing challenges from Colleoni, the wealthy new mob boss in Brighton. Fearing Spicer's loyalty, Pinkie arranges with Colleoni to have Spicer killed at the racetrack. On the day of the ambush, though, Colleoni's men also try to kill Pinkie. Pinkie returns home to find Spicer has survived the attack. Pinkie proceeds to push him down a flight of stairs to his death

Pinkie is a Roman Catholic, haunted by memories of his parents having sex and of his mentor Kite's death - a death precipitated by Hale's journalism. He is further haunted by the mortal sin he commits by marrying Rose outside of a church and then having sex with her. As this happens, Ida Arnold has won a huge bet on a horse race. She uses the cash to move into the best hotel in Brighton. She begins to pay off disgruntled members of Pinkie's mob like Cubitt and his unstable lawyer Mr. Prewitt. She also intensifies her pursuit of Rose.

Fearing Rose will break, Pinkie resolves to trick Rose into a suicide pact. His right-hand man Dallow tries in vain to convince him to let her live. On the night that Pinkie decides to drive Rose to the country for her suicide, Ida approaches Dallow and convinces him to tip the police off to Pinkie's whereabouts. The police ambush Pinkie and Rose moment before the latter attempts suicide. Pinkie panics and throws himself off a cliff into the sea.

The book ends with Ida Arnold debating whether she should return to her husband Tom, reasoning that humanity needs love above all else. Rose, meanwhile, is embittered by the Pinkie's death, but a priest convinces her that salvation is possible for all people.