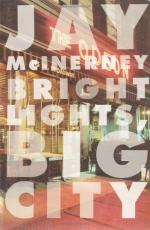 Bright Lights, Big City narrates a few disastrous days in the life of an aspiring young writer in the swirling, madcap world of young, upwardly mobile Manhattan in the 1980s. The book's narrator, plagued by a failed marriage and an unnamed sense of loss and guilt, watches helplessly from the distance of a cocaine-induced haze as he proceeds to squander his prestigious job and all sense of dignity and self-respect. Under the cover of an ironic sensibility, impervious to his surroundings, he plunges deeper into an abyss of nightclubs, shallow conversation, sex and drugs.

The narrator refers to himself in the second person, which allows him to combine familiarity and distance and well reflects the story's theme of personal disintegration and alienation.

The setting alternates between the narrator's day job at a prestigious, never named Manhattan magazine with a long tradition of publishing fiction, understood to be The New Yorker, where he works in the Department of Factual Verification, and his incessant, all-night clubbing binges. The story of his marriage to Amanda, a mid-western model who has left him for a life in Paris, is told in expository flashbacks. We are also given descriptive vignettes of his time at the magazine and snippets of information about his upper-middle class, deeply suburban upbringing to explain more fully his sense of alienation and loss, which is made clear finally at the end, when we are told of the death of his mother exactly a year previous to the unfolding events.

His work in the Department of Factual Verification entails checking New Yorker journalism pieces for factual accuracy, a job that he finds repugnant and at odds with his clearly stated ambition to be a fiction writer at the magazine. After a botched attempt at verifying the facts of a story on recent French elections, he is fired, which comes more as a relief than a surprise. Compounding this shame is a comic attempt, accompanied by his mentor in misbehavior, preppy icon Tad Allagash, to exact revenge by unleashing a ferret in the magazine offices at midnight.

The sophomoric high jinks take a distinctly bleak turn, however, when he discovers that his wife is in town for a fashion show. Using his wits to gain entry to the show, he attempts to disrupt the proceedings by calling out her name as she parades down the catwalk. It is doubtful whether she hears him, and he is instead thrown out of the venue.

The low point in this narrative of dissolution comes when the narrator blanks out at an Upper East Side singles bar and ends up in Queens with a teenaged girl. He slinks out of her apartment as her parents barely look up from the television. It's not clear which is more shameful for him, to have sought comfort with someone so young, or to have ended up in the outer boroughs of the city. In fact, the theme of the social geography of New York is a constant riff, as is the idea of a loss of faith and family.