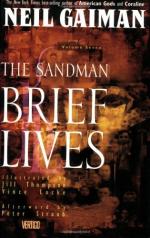 Neil Gaiman
This Study Guide consists of approximately 31 pages of chapter summaries, quotes, character analysis, themes, and more - everything you need to sharpen your knowledge of Brief Lives.

This detailed literature summary also contains Topics for Discussion and a Free Quiz on Brief Lives by Neil Gaiman.

Delirium, the youngest of the Endless, is seized with the idea of finding her older brother Destruction, who abandoned his duties and has kept himself hidden from the family for 300 years. Delirium asks Desire and Despair to help her find Destruction, but they both refuse. She then asks Dream. Dream is heartbroken by the recent breakup with his mortal lover Nada, but he agrees to accompany Delirium. He tells his librarian Lucien that he has no wish to find his brother, who expressly told them not to come looking for him, but that he would be going on the search solely to spend time with Delirium.

They set off to travel in the real world. Delirium has compiled a list of beings, mortal and god, who knew Destruction and might have some clue as to his whereabouts. Calamity seems to precede them. A long-lived lawyer named Bernie Capax dies in a freak industrial accident; a woman they choose to be their guide dies in a motel fire, and two long-lived humans must run for their lives from destructive forces closing in on them. Finally, after a run in with one of Destruction's old lovers, the goddess Astarte, an encounter that leads to the end of the goddess's existence on Earth, Dream calls a halt to their quest, breaks with Delirium, who is deeply upset by his unwillingness to continue, and returns to the Dreaming.

Death forces reconciliation between Dream and Delirium, and the two set on the search again, this time traveling to their eldest brother, Destiny's realm. Destiny tells them that they will need an oracle to find Destruction, one that is of the family. This leads them to Dream's estranged son Orpheus, whose head still lives in a sanctuary atop a Greek Island. Orpheus tells Dream where Destruction is in return for a boon which he will collect later.

Dream and Delirium confront Destruction on a neighboring island, where their older brother invites them to dinner and tries to explain to them why he left his duties and why he will not resume them. Destruction disappears again and Dream must return to Orpheus, who requests that his father kill him and end his now tiresome existence. Dream has no choice but to honor his son's wish and spill familial blood, an act that will have dramatic consequences for his future.

More summaries and resources for teaching or studying Brief Lives.