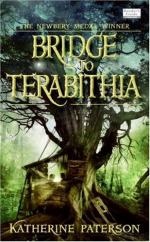 Katherine Paterson
This Study Guide consists of approximately 18 pages of chapter summaries, quotes, character analysis, themes, and more - everything you need to sharpen your knowledge of Bridge to Terabithia.

Bridge to Terabithia alludes to many other literary works, largely through Leslie and Jess's conversations. Leslie describes Melville's Moby Dick and C. S. Lewis's world of Narnia, and she allows Jess to borrow books she cares for, such as Lloyd Alexander's The Book of Three.

Leslie and Jess model their imaginary Terabithia after Lewis's Narnia, and the characters particularly enjoy fantasy and romance. Despite its believable characters and generally probable situations, Bridge to Terabithia contains a buried romance structure, a heroic quest and psychological regeneration for the hero.

Like most fantasies and romances, Bridge to Terabithia is highly symbolic.

Leslie and Jess cross water to enter Terabithia, an act that Swiss psychologist Carl Jung has identified in Man and His Symbols as "a frequent symbolic image for a fundamental change of attitude." While in Terabithia, Leslie and Jess engage in heroic roleplaying that has repercussions for...

More summaries and resources for teaching or studying Bridge to Terabithia.