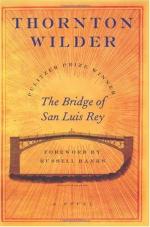 Thornton Wilder
This Study Guide consists of approximately 25 pages of chapter summaries, quotes, character analysis, themes, and more - everything you need to sharpen your knowledge of The Bridge of San Luis Rey.

This detailed literature summary also contains Topics for Discussion on The Bridge of San Luis Rey by Thornton Wilder.

The Bridge of San Luis Rey, by Thornton Wilder, was published in 1927 and awarded the Pulitzer Prize for Fiction in 1928. It has been included in the American Modern Library’s list of the best 20th century novels and in TIME magazine’s list of 100 Best English-Language Novels from 1923 to 2005. It is postulated Wilder’s work was a forerunner of the genre in which a disaster draws together the lives of otherwise unrelated persons. The story takes place in the 18th century, where a Franciscan priest, Brother Juniper, witnessed the fall of a bridge over a mountain pass in Peru and the consequent death of five people who were on this bridge when it fell. He wished to determine scientifically why those particular individuals were chosen for such a fate, and he devoted the following six years to the compilation of a book of his studies of their lives. His pursuit of this question, for which he could find no answer, led to his own execution. The strength of the book lies not only in the fundamental issues posed, but also in the beauty of Thornton Wilder’s expressive writing.

Wilder is reported to have based his plot on a play by Prosper Mérimée involving a courtesan in South America. He is also thought to have instilled into it discussions with his parents who held fundamentalist Protestant views on the nature of God. Rather than put forward his own views, he poses questions. The book opens with a blunt statement describing a fictitious incident that occurred in 1714 in the mountainous region of Peru when a bridge made of primitive materials collapsed, causing the death of five travelers. Having previously been considered totally reliable, the failure of this bridge of San Luis Rey severely shocked the people of the capital city, Lima. The author then goes back in time to relate the personal histories of these victims and what later became of their surviving relatives and associates.

The accident was witnessed by a Franciscan priest, Brother Juniper, who needed real-life material to support his hypothesis that theology could be a hard science and the will of God could be explained statistically. The incident provided for him both experimental subjects who died, and “controls” who did not. He determined to investigate their lives and their value to society. An enormous book of information was put together, which described in detail the history of the lives of the five casualties and their relationship with those who were close to them. The five named people who died in the bridge collapse were Doña María, an extremely wealthy woman; Pepita, her servant; Uncle Pio, the spurned manager of an actress; Jaime, the actress’s only son; and Esteban, who was returning from Cuzco to work in Lima.

Persons important in this story who did not die were the actress, Micaela Villegas, and María del Pilar, Abbess of a convent and orphanage. Esteban, an orphan, was a loved protégé of the Abbess, as was Pepita, also an orphan, who was given to the care of Doña María. Much of the plot is related through the extensive letters Doña María had written to her unloving daughter Clara; these letters subsequently found their way into the literature of Spain.

Over the years following the accident, Brother Juniper acquired a massive amount of information on his deceased subjects and the surviving “controls” but could not find support for his anticipated conclusion that worthy persons fared better than the unworthy. An explanation of the deaths in terms of personal value was not found; however, the love between the various people in the story, the refusal of love, and the loss of a loved one are revealed in his search. The employer of Brother Juniper, the church, accused him of heresy, burned him at the stake, and burned his heretical book, though a copy was found in the ancient University of San Marcos in Lima.

In the years that followed the collapse of the Bridge of San Luis Rey, the survivors regretted their hardness of heart. The actress went to work for the Abbess in her convent, Clara the unloving daughter of the Marquesa went to the Abbess for confession, and the Abbess herself realized the impropriety of her pride in the expectations she had of achievements in her work.

The final paragraph of the book expresses the thoughts of the Abbess, who accepted that all mortals have a life-span; it employs the bridge of San Luis Rey as a symbol of the survival of love that surpasses death.

More summaries and resources for teaching or studying The Bridge of San Luis Rey.