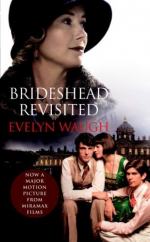 The story now changes to Charles' perceptions of Julia who has up till now been an ancillary character to Charles' relationship with Sebastian. Charles remembers meeting Julia for the first time at Brideshead when she was concerned about making the correct choices for her future. Julia had been in her debutante year and was concerned over the selection of an appropriate husband.

Meeting Rex Mottram had been good for Julia who was bored by the young men her own age. Rex was already established and had the sophistication and experience Julia demanded in a long-term relationship. Rex was also quite taken with Julia in whom he could have a society wife, which would help to advance his own career. Eventually the couple becomes engaged and Lady Marchmain insists on secrecy because Rex is not a Catholic.