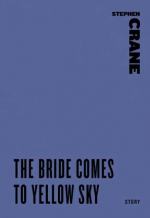 This detailed literature summary also contains Related Titles and a Free Quiz on The Bride Comes to Yellow Sky by Stephen Crane.

Having just gotten married in San Antonio, Jack Potter, town marshal of Yellow Sky, and the bride are aboard a train headed back to Yellow Sky, Jack's home town. Despite their elegant surroundings, both bride and groom are nervous about returning to Yellow Sky. While the bride is not used to such classy surroundings and is anticipating her life ahead of her, Jack is anxious about the reception that his marriage will receive from his community, particularly as he had not told them of his intentions when he left for San Antonio. When they arrive, they quickly rush toward Jack Potter's house, hoping that they are not seen.

Meanwhile, in Yellow Sky, six men are sitting in a bar, when a man rushes in, announcing that Scratchy Wilson, a local legend, has been on the drink again and is in one of his usual moods. While most of the locals in the bar are immediately aware of what was about to happen, there is one newcomer, a drummer, who asks the locals what is going on. They warn him that when Scratchy Wilson is drunk, there is sure to be some shooting, if not a gunfight. The only person who will engage in a gunfight with him is Jack Potter, the town marshal, and he was out of town at the moment. The door of the bar is locked and the men inside sit and wait.

The streets of Yellow Sky are quiet and empty as Scratchy Wilson patrols them, yelling out callous invitations to join him in a gunfight, as he grows repeatedly frustrated as his requests go unanswered. He approaches the door of the bar, and after taking a few pot shots at it, decides to shoot at the lazy dog at the door, making it run away in fear. He continues to take pot shots at the town, before deciding to take up the challenge with his old rival, Jack Potter.

Scratchy Wilson approaches Jack Potter's house and calls out his challenge, with no response. Still frustrated, he reloads his gun, and the bride and Jack Potter interrupt him. Scratchy points his gun at Jack, dissatisfied with Jack's answer that he did not have a gun on him. Jack announces that he had just gotten married, to the complete Scratchy's shock. The shock of the news in enough to turn Scratchy away from the gunfight, and he walks away, flabbergasted.