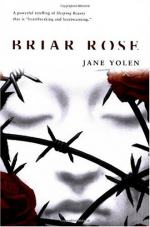 Jane Yolen
This Study Guide consists of approximately 31 pages of chapter summaries, quotes, character analysis, themes, and more - everything you need to sharpen your knowledge of Briar Rose.

Rebecca Berlin, known to family and friends as Becca, is the youngest of three sisters and the one who most loves her grandmother's stories, especially her version of Sleeping Beauty. Becca's grandmother, known to the girls as Gemma, always tells the story the same way so that the girls know the story by heart and often talk along with the various parts of the story. As they age, they question particular aspects of the story, such as demanding definitions for particular words or phrases. The story has some deviations from the traditional Sleeping Beauty story. For example, in Gemma's version, the prince wakes only the princess and the story ends with only the princess and her daughter living happily ever after.

Gemma grows old and moves to a nursing home where Becca visits with her almost daily, though her sisters seldom return home for a visit with Gemma. Gemma's final words to Becca are to exact a promise that Becca will find the castle from the story as her only inheritance from Gemma. Becca begins to conduct research after Gemma's death, her direction prompted by several documents and other clues left by Gemma. Among the documents is an entry form written upon Gemma's arrival in America and a ring with the initials, JMP. Becca soon discovers that Gemma was apparently among the refugees held in a camp in Oswego, New York, upon her arrival in America and that Becca's mother, Eve, was born there.

Becca learns that Gemma likely came to America from at town in Poland called Kulmhof, and decides that she wants to go there to trace her grandmother's origins. She knows the trip is a long shot because the camp of Kulmhof in the town of Chelmno was not an interment camp but an extermination camp and that no women are known to have escaped death at that camp. Becca finds a priest who directs her to a man named Josef Potocki. Josef had been among the men who'd pulled Gemma from a mass grave. The men had administered mouth-to-mouth, saving her life, though she is the only one to survive. Josef says that Gemma had married one of their group who had also fathered her child before dying. Gemma had then been sent to safety, armed with the proper documents to describe her as a princess traveling incognito. She'd arrived in America to be interred in a refugee camp in New York before earning her citizenship and starting a new life with her daughter.

More summaries and resources for teaching or studying Briar Rose.