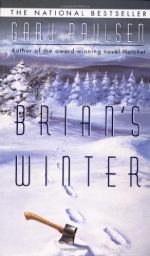 Gary Paulsen
This Study Guide consists of approximately 20 pages of chapter summaries, quotes, character analysis, themes, and more - everything you need to sharpen your knowledge of Brian's Winter.

Brian has a hatchet his mother gave him that he uses to survive until he finds the emergency packet on the plane.

Brian finds a knife in the emergency pack on the plane and uses it as a tool to make clothing, bows and arrows, and to carve up meat.

Brian finds a .22 rifle in the emergency pack on the plane, but its firing pin breaks in the beginning of this novel.

There is a dark rock in Brian's shelter that he calls fire rock because he begins making fires with sparks that emit from this rock when he hits it with his hatchet. Brian later realizes this rock is flint and he uses it to make arrowheads and a point for his spear.

Brian creates a large bow and arrow out of hard wood with the intention of...