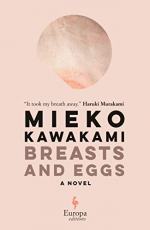 Mieko Kawakami
This Study Guide consists of approximately 75 pages of chapter summaries, quotes, character analysis, themes, and more - everything you need to sharpen your knowledge of Breasts and Eggs.

This detailed literature summary also contains Quotes and a Free Quiz on Breasts and Eggs by Mieko Kawakami.

The following version of this book was used to create the guide: Kawakami, Mieko. Breasts and Eggs. Europa Editions, 2020.

In Book One, Natsuko, a 30-year-old unpublished writer, meets her 39-year-old sister Makiko and Makiko’s 12-year-old daughter Midoriko at Tokyo Station. Makiko, who lives and works in Osaka, is in Tokyo for a consultation at a clinic for a breast augmentation procedure. For unknown reasons, Midoriko has not been speaking to her mother but only communicating with her through writing.

Natsuko’s first-person narration of the main timeline in Book One is interspersed with her memories of growing up with her mother, her grandmother Komi, and Makiko. Natsuko and Makiko’s father left when they were still children, and their mother and Komi both died of cancer when Natsuko was a teenager.

Journal entries that Midoriko has written are also scattered throughout the narration. Midoriko writes about puberty and the reproductive process, about which she is learning at school and researching on her own, as well as her peers’ reactions to their bodies changing. She expresses anger, sadness, and concern at her mother’s wanting breast implants and thinks that it would be better if no one had children, an opinion that is bound up in her knowledge that her mother has to work hard in order to support her.

During their time in Tokyo, Makiko and Midoriko stay with Natsuko in her apartment. Makiko and Natsuko go to a bathhouse, where they discuss Makiko’s body and surgery. The three characters eat at a Chinese restaurant, after which Makiko and Natsuko stay up late drinking and talking. Makiko tells Natsuko stories about the bar in Osaka where she works as a hostess and the latest drama that has occurred there.

On the day of Makiko’s consultation, Natsuko takes Midoriko to an amusement park where they spend the day together. They become worried when Makiko is late returning that night. Makiko shows up drunk and begins to criticize Midoriko. Midoriko breaks her silence, expressing frustration with her mother for having given birth to her, and smashes raw eggs on her face. Her mother imitates her, smashing eggs on herself. The two eventually fall silent and seem to reconcile. The next day, Midoriko and Makiko return to Osaka.

In Book Two, most of which takes place eight years later, Natsuko has become a successful writer but is struggling with the novel she is writing. She is also struggling with her desire to have a child. She had a relationship with a man named Naruse when she was younger but discovered that she did not enjoy sex, and she is now considering becoming pregnant through donor conception. In an attempt to educate herself on the subject, she reads a book about the experiences of the children of donors.

At the suggestion of her editor, Ryoko Sengawa, Natsuko attends a reading, where she meets a woman named Rika Yusa, a single mother and a writer. Natsuko and Rika discover that they have much in common and a friendship grows between them.

Natsuko goes to an event on Christmas Day that features one of the people in the book she has read, a man named Jun Aizawa who discovered as an adult that his biological father was an anonymous sperm donor. Natsuko’s first conversation with Aizawa is awkward and cursory, but he invites her to attend a symposium on donor conception. After the event, she meets with Rie, an acquaintance who talks about the difficulties of her family life.

Natsuko attends the symposium Aizawa invited her to, where he introduces her to another child of a donor, a woman named Yuriko Zen. Natsuko and Aizawa later meet for coffee. He tells her how he found out he was a donor-child, explaining that he first heard the news from his grandmother and then asked his mother for more details. As she continues to spend time with Aizawa, Natsuko realizes that she has feelings for him. However, it has become clear that Aizawa is in a relationship with Yuriko.

One night, Natsuko has dinner with Rika and Sengawa at Rika’s apartment. Rika expresses support for Natsuko having a child on her own, but Sengawa criticizes the idea, saying Natsuko is lazy and suggesting that she should devote more time to her writing career. Natsuko later calls Makiko and tells her she is thinking about donor conception, and Makiko also expresses disapproval.

Natsuko schedules a meeting at a restaurant with an independent sperm donor named Onda. It becomes clear during their meeting that Onda wants to have sex with her, and she flees in horror. Later that night, Natsuko spots Yuriko in the street and follows her. The two end up having a conversation, in which Yuriko, who experienced a childhood of abuse, reveals that she thinks having children is selfish and violent, as parents are always taking the risk of making their children suffer. Later, while she is recovering from a bad fever, Natsuko speaks to Aizawa. They each confess their feelings for the other, but Natsuko rejects the idea that their mutual feelings have any meaning before cutting contact with him.

Natsuko finds out from Rika that Sengawa has died of cancer, which is shocking to them both as they did not realize she was sick. While Natsuko is in Osaka to celebrate Midoriko’s birthday, Aizawa calls her and asks to meet with her. He tells her that he has stopped seeing Yuriko and suggests to Natsuko that the two of them have a child together.

Two years later, Natsuko has become pregnant with Aizawa’s child through artificial insemination. They have agreed that Natsuko will raise the child and that they will not have a committed relationship, but that he may be a part of the child’s life later on. Natsuko speaks with Rika about this and about how she is getting along with her new editor. The novel ends with Natsuko at the hospital, giving birth to a baby girl.

More summaries and resources for teaching or studying Breasts and Eggs.