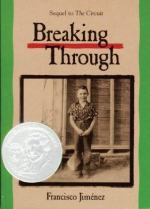 Breaking Through Summary & Study Guide includes comprehensive information and analysis to help you understand the book. This study guide contains the following sections:

This detailed literature summary also contains Topics for Discussion on Breaking Through by Francisco Jiménez.

"Breaking Through" is a non-fiction book comprised of a series of anecdotes. The book is about the author, Francisco Jimenez, and his experience as a Mexican immigrant in the United States. Each chapter is a different anecdote, and the entire book is told in the past tense as Francisco remembered his experiences from childhood and adolescence.

When Francisco and his family first came to the United States in the 1940s from Mexico, only Francisco's father was a legal immigrant since he had a work visa from a strawberry farmer named Ito. Francisco, his mother, and his older brother Roberto were illegal immigrants. Francisco's younger siblings, Trampita, Torito, Rorro, and Ruben, were all legal immigrants. Before they were deported, the Jimenez family traveled to different tent labor camps depending on where there was work. Mostly, they followed the crop seasons since Papa worked in the fields.

When Francisco was about 14 years old he and his family were deported back to Mexico, but only for a short while as they got their documentation in order. While they waited to be able to return to the U.S., all eight members of the Jimenez family - six children, Mama, and Papa - stayed in a hotel room within a few blocks of the border. After their applications were complete and everyone could return legally to the U.S., only Francisco and Roberto went so they could earn enough money to afford to bring the rest of the family. Their younger siblings and parents stayed with Papa's sister in Guadalajara, Mexico, until Roberto and Francisco could send enough money over time to bring everyone over.

As Francisco and Roberto lived on their own they became more interested in American culture. Francisco paid attention to what his peers liked, which was rock 'n' roll and dancing, and so worked hard to learn both. He and Roberto went to dances at the local Veterans Memorial building on Saturday nights. Sometimes, too, they would go to American movies together, something they had never done with their family.

The rest of Francisco's family returned from Mexico and their life resumed as usual. Francisco and Roberto were still allowed to go to dances on Saturday nights, but that they were only allowed one night out a week so if they wanted to do anything else, they couldn't go to the dance. They worked for a cleaning company owned by a man named Mike Nevell during the week and sometimes in the fields for Ito on Sundays, so Papa wanted them ready to work, since the family depended on their income.

Papa was often in a bad mood because he suffered from severe back pain, which meant his ability to work in the fields was not consistent. He hated not being able to provide for his family, and so his mood didn't change too often. Mama encouraged Francisco in whatever he wanted to do, which was usually something related to school.

During high school, Francisco worked hard at all his classes, but especially English and typing class because they were the two he had the hardest time keeping up with. For typing class in ninth grade, he fortunately came across an old typewriter at one of the law offices he cleaned. He practiced and got much better, ultimately getting a good grade in the class. For English class, Francisco worked closely with the teacher to correct his mistakes. He also practiced reading more, and wrote some of the poems and vocabulary lists he needed to memorize on a card he kept in his pocket so he could study while working.

For extracurricular activities, Francisco was president of the Spanish club, a member of the Squires club, and participated in the Junior Scandals, a variety show put on by students. He enjoyed the time with his peers, especially after Roberto left the house when he got married. Roberto and Francisco were best friends, so when Roberto left Francisco was sad and needed a distraction.

At the beginning of his senior year, Francisco came down with mononucleosis, a viral illness that made him so exhausted he couldn't work or go to school. Trampita, Roberto, and Mama covered for Francisco while he recovered. Francisco took the advice of his mother and prayed for healing, and four weeks later felt almost back to normal.

Francisco also worked closely with his guidance counselors to make sure he had the right classes to set him up for the future. He wanted to be a teacher. His first guidance counselor, Mr. Kinkade, helped him take the right courses, and his second counselor, Mr. Penney, helped set him up with scholarships, a federal loan, and applying to Santa Clara University. Mr. Penney also suggested a field trip to a local college so Francisco could get the feel for what it'd be like. Francisco took the opportunity and looked forward to going to college, even though he knew he'd miss his family.

Francisco was accepted into Santa Clara University. He worked for part of the summer leading up to his leaving, until Trampita completely took over Francisco's cleaning job with Mr. Nevell's company. The entire family, minus Roberto and his wife and newborn, traveled from their home in Santa Maria to Santa Clara University. As Francisco drove, he was proud of himself for breaking through barriers of language, academic challenges, and cultural differences in order to make a better future for himself. He hated moving around when he was a child, but this was one move - from home to college - that he didn't mind making.

The author includes an Author's Note at the conclusion of the book in order to notify the reader that to write "Breaking Through," he relied heavily on stories from his living family members. Also, that any conversations where Francisco could not remember the exact wording, he filled in the dialogue.

Breaking Through from BookRags. (c)2022 BookRags, Inc. All rights reserved.