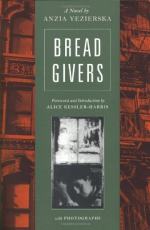 Anzia Yezierska
This Study Guide consists of approximately 42 pages of chapter summaries, quotes, character analysis, themes, and more - everything you need to sharpen your knowledge of Bread Givers.

This detailed literature summary also contains Topics for Discussion and a Free Quiz on Bread Givers by Anzia Yezierska.

Sara is ten years old, the daughter of Russians who came to America in search of a better life. She has three sisters, Bessie, Mashah and Fania, and none of the three girls has a job as the story begins. As the story begins, Bessie returns home from another fruitless search for work as Sara is peeling potatoes for the family's supper. Mashah arrives, full of good humor and laughter, saying that she purchased flowers for trimming her hat. When Fania arrives and discovers Mashah spent ten cents on the flowers, she throws her own hat to the floor, kicking it in frustration. This is the typical life of the Smolinsky family where merely having enough to eat is a constant struggle.

The family lives in New York. The parents are Reb and Shenah Smolinsky. Reb is a religious man to the exclusion of everything else—including spending time with his family and holding a job. He depends on the income of Bessie, Mashah and Fania to pay the family's bills. The family undergoes a series of changes and Shenah eventually convinces Reb to move his religious books from a room he has set aside for study so that she can rent out that space. The extra income, added to the fact of all three of the older girls working, means the family finances are somewhat less stressed. Sara's job is to gather coal. She does so by scrounging through discarded ash piles in search of small bits of unburned coal. She soon refuses to do this and begins selling herring on a street corner to make the money to buy the coal. It is this attitude that will take her from her father's home into many years of study to become a teacher—her refusal to give up means that she does accomplish that goal.

Reb arranges the marriages of his three older daughters though each care about a young man. None of the marriages involve love and the last to be married, Bessie, is given to a fish-peddler with six children in return for five hundred dollars. Reb uses the money to purchase a store. However, it is a scam and he actually wastes the money. There is no indication what finally happens to the store but when Sara returns from her years at college her parents are no longer operating the business.

Sara runs away when her father berates her for trusting a girl to bring back the two pennies she owes for a bag of rice. She lives in a dingy room, works at a laundry and goes to school. She is offered marriage by the friend of her brother-in-law. Though the man is wealthy, she knows she will never be happy in the relationship and declines, earning her another severe scolding from her father.

Sara puts in her time at college working in a laundry. She does not fit in socially with the other students but soon gains the approval of the older professors. It takes some time but she eventually realizes that her lifetime of experiences have made her more qualified to succeed as an adult than most college students.

She graduates and returns to New York for a teaching job to find her mother dying. Her father quickly remarries. His new wife is a woman who expects to be kept in style and who demands that Sara and her sisters support Reb's household since he refuses to work. The girls decline and Reb is soon selling gum though he is very ill. The girls begin offering some money and small gifts, hoping to earn Reb some peace in his household. Meanwhile, Sara has met and fallen in love with a man named Hugo Selig. Hugo wins Reb's respect by asking his assistance in learning Hebrew. Reb is still unhappy in his marriage and is talking about divorce, saying the Talmud allows it for his situation. Sara invites him to live with her and he says he will consider it. When Sara tells Hugo that her father will take over their lives, Hugo says their home will be richer for her father's presence.

More summaries and resources for teaching or studying Bread Givers.