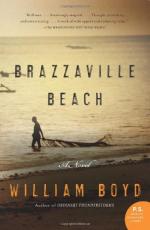 Plot Summary
+Chapters Summary and Analysis
Prologue
What I Like to Do and The Mockman
The Wave Albatross and The Night Heron; Noise or Signal; The Margin of Error; the Inverse Cascade
Usman Shoukry's Lemma; Ikarios and Erigone; Cabbages and Spheres
Fermat's Last theorem; The Happiness of the Chimpanzee; Pulul
The One Big Axiom; The Cosmic Dawn
The Calculus; Fame
The Clearwater Set; Death of a Prophet
ECT; Minonette; The Neural Clock; The Weight of the Sense World
Three Questions; Fermat's Last Theorem II
Two Kinds of Catastrophe; Invariants and Homeomorphs; Finesse; The Languid Fire
Epilogue
Free Quiz
Characters
Objects/Places
Themes
Style
Quotes
Topics for Discussion
Order our Brazzaville Beach Study Guide

William Boyd (writer)
This Study Guide consists of approximately 36 pages of chapter summaries, quotes, character analysis, themes, and more - everything you need to sharpen your knowledge of Brazzaville Beach.

This detailed literature summary also contains Topics for Discussion and a Free Quiz on Brazzaville Beach by William Boyd (writer).

To read Brazzaville Beach, one must first accept and become comfortable with a complete fluidity of time, as Hope Clearwater tells her story. In fact, the tale involves three large parts of Hope's life: her educational training and marriage to a brilliant mathematician, John Clearwater; her life after his death as a research scientist and part of an ongoing study of chimpanzees in the Congo; and her current state of inertia, living in a beach house and completing rather mundane tasks to support herself as she attempts to sort out the purpose of her life and the possible path of its next phase. Hope moves the reader back and forth among these three existences, and the work at first seems to lack essential continuity. As one becomes accustomed to these "time travels," however, the novel becomes a piece of art, into which all of Hope's experiences merge into central themes.

As a young graduate student, Hope becomes infatuated with a newly-arrived mathematician, John Clearwater. She pursues him ardently and they marry quite quickly. Hope finishes her doctorate and takes a part-time position chronicling the plant life on an old estate near London. John immerses himself in his work, gradually becoming less and less rational, as is often the tragic case with genius. Eventually, Hope must extricate herself from the marriage and does so without great sadness. John descends deeper into insanity, ultimately committing suicide. The next phase of her life entails the work at Grosso Arvore, as a team member of a group of researchers, observing chimpanzee behavior and contributing to the final book of Eugene Mallabar, the pre-eminent scholar on chimpanzees.

During the Grosso Arvore period, Hope discovers that chimp behavior is not always as Mallabar has portrayed it. While he has long ago concluded that chimps in the wild are non-aggressive, Hope witnesses violence, attacks, murders, infanticide and cannibalism among two groups of chimps that have divided themselves, living apart from one another. Hope's efforts to convince Mallabar are met with resistance and anger, and she is forced to remain mute, so that his research and conclusions remain intact. Secretly, she keeps he own journals of the events, however, and writes an article for publication, negating the conclusion that chimpanzees are peaceful creatures. After a frightful and violent confrontation with Mallabar, Hope leaves the research project and takes up residence in a small beach house close to town.

The final phase of Hope's life is the present, living in a beach house purchased by a lover who has now disappeared but, who, as well, was not honest with her about his own past. She suspects he may still be alive and may one day reappear. Her daily routine is now filled with leisure, as she engages in translation work for another male friend and performs some perfunctory tasks for the Grosso Arvore project. She is "sorting out" her life, as she says, in order to determine what constitutes a purpose and true tranquility. The reader gains no sense that Hope has drawn any firm conclusions at the novel's end.

More summaries and resources for teaching or studying Brazzaville Beach.