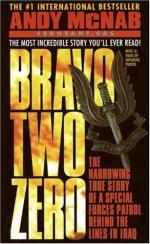 Andy McNab
This Study Guide consists of approximately 27 pages of chapter summaries, quotes, character analysis, themes, and more - everything you need to sharpen your knowledge of Bravo Two Zero.

Andy had a propensity for getting in trouble and after his first arrest when he was 16, he decided to join the Army. It was a good move for him. At first he did not like the rules and structure, but soon found out that the negatives far outweighed by the positives of other aspects of military life. He loved the adventure and excitement that came along with the job and he remained dedicated to his work even though it was the source of the demise of three marriages.

In 1991, Andy was sent on a mission to destroy landlines in the Northern Main Supply Route and to find and destroy a Scud. There were seven other men on a mission, and it was called Bravo Two Zero. He left his girlfriend, Jilly and his daughter, Kate and went off to Iraq. The team had limited information to go on since there weren't very many updated maps. They also knew that their mission was very dangerous because the terrain was so flat that there was nowhere to hide. So they did not take vehicles, but asked to be dropped off by helicopter. They had two weeks to complete their mission.

Right from the start, their mission was difficult. Their radio communications were failing, it was unusually cold, and they discovered that there were humans with dogs right in their vicinity in areas that they thought were isolated. Survival was key, especially after they were compromised, and the team began a 100-mile trek to Syria where they could find safety. Prepared for a warmer climate, the team members were freezing and battling hypothermia. They were stuck in a blizzard and had several confrontations with the enemy.

At one point, the team accidentally split up. They all knew their final destination and hoped to reunite in Syria. This did not happen. Andy, himself, was captured just two miles from Syria's border. He was taken to a military camp where he was beaten and interrogated. Before they left on their mission, the team had come up with a cover story. Andy stuck to it, despite his beatings. While dealing with the hardships of imprisonment, Andy found one glimmer of hope. At this camp, he saw one of his Bravo Two Zero team members named Dinger. The two saw each other on a regular basis and were able to inspire each other with quick smiles, winks, and the occasional whispered word.

Beatings became a regular part of life as well as inhumane treatment within the cells. However, Andy never broke and stuck to his story. Later on in the prison stay, he and Dinger were reunited with a third member of the team. When the war was over and they were released, they discovered that five of the eight members of Bravo Two Zero survived. The team members made it home, regained their health, and headed back to work.