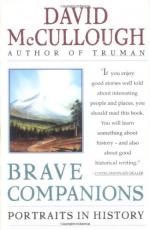 David McCullough
This Study Guide consists of approximately 53 pages of chapter summaries, quotes, character analysis, themes, and more - everything you need to sharpen your knowledge of Brave Companions.

This detailed literature summary also contains Topics for Discussion and a Free Quiz on Brave Companions by David McCullough.

Brave Companions is a volume of seventeen previously published articles and addresses about diverse people and events selected by historian David McCullough to inspire Americans to shake off their ambivalence towards and fight their ignorance of history, which has much to teach.

German-born naturalist, Alexander von Humboldt, travels through Spain's long-closed New World holdings, discovering and collecting new species, inspires many to study the natural sciences, including Louis Agassiz, but is remembered today only for discovering the Humboldt Current, which he insists he has merely described. Swiss-born Agassiz does seminal work on the Ice Age, comes to America to earn a fast dollar lecturing, and stays on to enliven Harvard University and encourage Americans to engage in science and learning. Having inspired Charles Darwin, Agassiz denounces his heresy, and loses his once-avid following. Harriet Beecher Stowe, a rebel against her father's Calvinism, has published a few pieces before writing Uncle Tom's Cabin, the book that sparks the Civil War. She writes steadily for another 30 years, but nothing rivals her first novel, which had been expected to fail but changed the nation. These are McCullough's three "Phenomena."

"The Real West" is seen through a young Theodore Roosevelt ranching in the Dakota Bad Lands to nurse his broken heart, interacting with the Marquis de Mores, out to earn a fortune, cutting the Chicago meat packers out of the equation and market beef directly to the East. Writer Roosevelt, who wants to preserve the Old West before it inevitably dies out, tips his hat to great Western illustrator/writer Frederick Remington, who does the same. Both write in comfort back home, sallying out to the West only for inspiration.

McCullough's "Pioneers" are the pen who hack through disease-infested jungles to build the Panama Railroad, creating a path for the later canal, and the men who brave "the bends" to sink the caissons on which the Brooklyn Bridge is built. John A. Roebling is the project's protomartyr, Washington Roebling his much-suffering (physically and emotionally) son and successor, who as an invalid hermit supervises the massive project through his thoroughly competent wife, Emily. The bridge engineers leave a rich legacy of detailed drawings uncovered 70 years after the project is successfully completed. The final pioneers, a few decades later, are the remarkable pioneer aviator/authors of the 1920s-mid 30s. Like Roosevelt and Remington, they realize their thrilling era is quickly passing and want it not to be utterly forgotten.

McCullough next portrays four "Figures in a Landscape," people he has interviewed or knows personally. Under-appreciated American author, Conrad Richter, is a subject who turns into a friend. Harry Caudill is a Kentucky activist fighting strip mining's rape of the Appalachians. Miriam Rothschild is an untrained but highly acclaimed English naturalist, heir to a fabled fortune, who lives in simplicity, publishes quirky books, and reintroduces wildflowers to the countryside. Finally, famous American photographer, David Plowden, takes his friend on a day trip through rural Illinois, commenting on his craft and the authenticity of heartland America.

Finally, McCullough offers four meditations on the legacies of American history, including a paean to the great and beloved city on the Potomac, a sweeping survey of the half-century 1936-86, a "Recommended Itinerary," physical and literary for 1986 graduates in Middlebury, VT, and an appreciation of the U.S. Congress originally delivered at its bicentennial celebration. A common thread through Part 5, "On We Go," is that Americans must get over their ambivalence towards and fight their ignorance of history, which has much to teach.

More summaries and resources for teaching or studying Brave Companions.