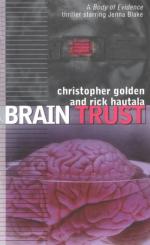 Christopher Golden
This Study Guide consists of approximately 32 pages of chapter summaries, quotes, character analysis, themes, and more - everything you need to sharpen your knowledge of Brain Trust.

"Brain Trust" by Christoper Golden and Rick Hautala is the story of Jenna Blake and her fight against a covert conspiracy that may or may not be associated with a secretive unit of the Federal Bureau of Investigation. Jenna is a nineteen-year-old college student at Somerset University near Boston, Massachusetts. She is a pre-medical student and plans to have a career in forensic sciences after completing her education. She works as a part-time pathology assistant at the university's Medical Center for Dr. Walter Slikowski.

As the story unfolds, spring break is a day away and Jenna and her roommate and best friend, Yoshiko Kitsuta, have plans to travel to Captiva Island near Fort Myers, Florida, for a week of fun, sun and relaxation. Dr. Slikowski, or Slick as everyone calls him, cautions Jenna to enjoy herself and forget about school and her job. Jenna is a serious and driven student and worker who find it difficult to leave her responsibilities behind her. She promises she will have fun for forget all about school, Slick and Dr. Al Dyson, the M.E.'s resident. Jenna also says good by to Danny Mariano, a local cop and friend. He's in the hospital recovering from burns that he sustained during a recent investigation. He is thirty-two and way too old for her but she can't seem to lose the crush that she has on him.

But the girls take off and everything is fine or seems to be. Meanwhile, in Vermont, an old semi-retired professor, Whitney Bannister, is framed by a student who claims he propositioned her. Two mysterious men show up and escort him to the roof of the university and push him to his death. His death is ruled a suicide by the coroner. During the autopsy the coroner and his assistant witness a strange web-like material in the man's chest and what looks to be a mutated form of cancer.

While jet-skiing in Florida, Jenna and Yoshiko witness the death of an old man who was riding on another jet-ski. The jet-ski and the old man were blown to pieces by a huge blast. As Jenna goes to cover the man up with a tarp, she notices a web-like material and strange tumor in the man's open chest cavity. The coroner takes note of the same strange tumor and substance during the autopsy.

Jenna knows that something is up when the local coroner denies that there was anything unusual in the dead man's chest cavity. She however has seen something. Dr. Dyson's friend, Alice, was the assistant coroner during the autopsy of the man in Vermont and had told Dyson about it. Jenna begins to ask questions and links the two deaths together. When Alice and the local coroner later officially deny that there were any anomalies found in either man, Jenna is certain that there is a conspiracy at work - and an evil one.

Jenna continues to dig into the case and comes to the notice of those who want to cover-up the conditions of the men. Against many warnings, Jenna continues to push the investigation and finally asks too many questions to the wrong people. She becomes the target of the murderous "agents" who are being directed by some unknown over-boss. But Jenna is relentless and she barely escapes with her life. While hunting down Jenna, her pursuers leave a wake of death behind them. In the end, the murderers are stopped and killed. But their deaths are dissatisfying to Jenna. Why did the FBI take these men out? If they had arrested them, they could have learned who was behind the plot. Jenna is left with the dark thought that maybe the FBI didn't want them to talk.

More summaries and resources for teaching or studying Brain Trust.