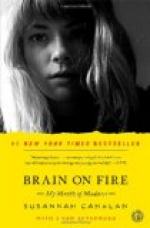 Brain on Fire: My Month of Madness Summary & Study Guide

Brain on Fire: My Month of Madness Summary & Study Guide includes comprehensive information and analysis to help you understand the book. This study guide contains the following sections:

This detailed literature summary also contains Topics for Discussion on Brain on Fire: My Month of Madness by Susannah Cahalan.

"Brain on Fire - My Month of Madness" by Susannah Cahalan is the story of the author's struggle with an rare disease that made her paranoid, hallucinatory and caused her and her loved ones to question her sanity. In the end, the source of her condition proved to a physical one, a unique disease with a name that does not make the nature of the disease immediately apparent to the lay person. However, the disease, anti-NMDAS-receptor encephalitis, is thoroughly covered by Cahalan in terms that are clear and understandable.

Susannah Cahalan was a bright and attractive twenty-four year old woman who lived in New York City and was a reporter for the New York Post. She had been with the Post since she was seventeen when she was hired as an intern. She earned her degree at Washington University in St. Louis. While a senior there and still associated with the Post, she got an exclusive interview with a notorious pedophile and kidnapper that garnered the nation's attention.

Cahalan's journey into a month of madness began with two small insect bites on her arm. She lived in New York City and at the time there was panic in the Big Apple that it was being plagued with a bedbug infestation. Cahalan was sure that the tiny pests had attacked her studio apartment. Even though the exterminator found no sign of bedbugs, Cahalan insisted that he spray for them just in case. Cahalan made sure she hid her bug bites from her co-workers. She feared that they would judge her harshly if they thought she had bed bugs. The "bed-bug" incident was just the tip of the iceberg. Cahalan began to hallucinate and become paranoid, fearing that people were plotting against her and that she, a formerly gregarious and confident young woman, was a big failure and loser.

Susannah's boyfriend, Stephen, her parents, and her co-workers all began to see a Susannah that they didn't know. Her mental and emotional issues were followed by physical ones. As the disease progressed, her movements became awkward, her speech became slurred, and she began having seizures. Although doctors kept insisting that her test results were normal and showed no presence of significant disease, her condition only worsened. Finally, a doctor admitted her into NYU's medical school hospital.

Susannah was in the hospital twenty-eight days before the accurate diagnosis was made. Prior to that doctors had suspicions of a plethora of conditions and diseases ranging from bipolar disease and schizophrenia to dire physical ailments including cancer. Finally, a doctor known for his ability to solve medical mysteries was called into the case. Dr. Najjar didn't take long to pinpoint Cahalan's problem. He gave her a simple "clock test." He asked her to draw a clock with all its numbers. When she drew the numbers, one through twelve, just on the right-hand side of the clock, he knew immediately that the right-hand side of her brain was inflamed. His startling diagnosis was confirmed with a brain tissue biopsy which was sent to Dr. Dalmau who had worked with patients who displayed schizophrenic symptoms and had brain inflammations. The disease was known as Dalmau's disease and in more technical terms it was called, anti-NMDAS-receptor encephalitis. Simplifying the condition, the doctors told Susannah's parents that her brain was on fire and that her antibodies were attacking her brain.

The road to recovery was not easy but at least the doctors knew what was wrong with her and how to treat it. They never did isolate exactly how she contracted the disease although there were several possibilities. Susannah made it back all the way and returned to work seven months after she was first afflicted with the ailment. She wrote about her disease in an article that was run in the Post, which helped countless people who had loved ones suffering from the same rare condition. Susannah feels a lot like herself these days but she knows that her ordeal changed something within her forever. She see it when she catches her reflection in the mirror and looks deeply into her eyes.